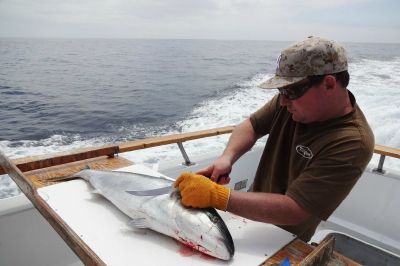 The best part of catching yellowtail is eating them. Bleed them as soon as they hit the deck, flush them out with a hose and get them on ice!

“Men really do need sea monsters in their personal oceans.” John Steinbeck – The Log from the Sea of Cortez

Until you have landed a large mossback you do not know the power that these jacks possess. The ability they have to take you into whatever structure is nearby, be it an open water floating kelp paddy or a barnacle encrusted island reef is uncanny. Hang a large model on the outer reef at Orange Rocks (Catalina) and you better turn its head early or you will get dusted. 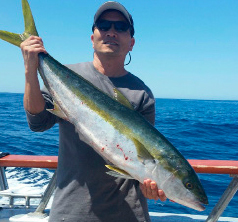 Over the years, I am on my ninth season with Options, the fall cycle seems to be the time that big yellowtail will populate that reef in numbers. It holds fish year round but October/November seems to bring in the bruisers. Several years ago we were in the right place, at the right time but got outgunned. Walt a fine customer of ours hooked one first and was slow to get up the rail and even with a two speed reel he could not wrestle the fish away from the anchor chain. I was up next and fought a vigorous battle but even a thicker gauge lead head hook was no match for the monster on the other end and bent out. Captain Wes could not handle it and came down from the wheel house wielding a heavy stick with an 80 to 80 connection. He hung a fish, bent the rod in half and then snap went the rod. 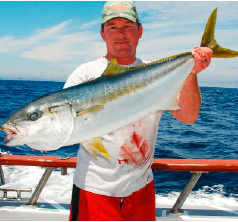 The California yellowtail ranges from the Baja Peninsula and Central Mexico to Washington state. I would not be surprised if some made it all the way to Canada last year! They inhabit both offshore and inshore waters, while we have our home-guard fish this is still a highly migratory species. From the coastal and island kelp lines to many miles from anything terrestrial, yellowtail are the consummate game fish, at least in my ethos. They are excellent table fare. As with all fish, and game for that matter too, proper field dressing and cooling are tantamount to having a quality product for your culinary enjoyment. I cannot sing enough praises for this California beauty. Eat it raw or make breaded fish sticks for the kids, the utility of this fish is myriad.

Most importantly in my mind they are a most worthy adversary. Getting into a brawl with a big yellowtail spikes your adrenaline and wakes up the inner primordial quite nicely. I have fished my whole life and caught many different fishes in many different seas – the yellowtail is as tough as they come. I caught a big amberjack in January down in Puerto Vallarta aboard Maximus and that dude beat me up but I bested him. They are very close cousins and fight like the dickens too.

As you can tell I have mad respect for these fish. The vast range of the yellowtail, the diversity of habitat that they inhabit and what they provide as a food fish places them at the apex of the piscatorial hierarchy. While they might not hold the glamour of highly migratory billfish in California or the mystery of the elusive white sea bass – yellowtail are everyman’s game fish and accessible. One of the beauties of yellowtail fishing is that there are so many different ways to catch them. They range from the bottom to the top of the water column, literally. I have caught first thirty-pound class fish from 200 feet of water off Punta Lobos on Isla del Carmen in Loreto, B.C.S. A big heavy Krocodile with a strip of mackerel belly punctured to one of the treble prongs did the trick. As soon as it hit the bottom that fish attacked the offering and before I could get the reel in gear it made short work of my instantly friction burned thumb! I was a young kid still fishing with the rod in the wrong hand (for a righty) but I got the fish. 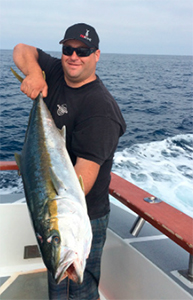 Brett Burkey an Options regular and hunting/fishing buddy of the author with a nice coastal fish.

On the other end of the spectrum sight casting at breaking yellows with a surface iron is spectacular, especially when you see that swirl behind the jig with a hot fish in pursuit and the rod loads up, bendo! I love fishing artificial but yellowtail eat everything; Spanish mackerel, dead squid, strip baits, red crab you name it. This is where the dropper loop really comes into play and is highly effective for a variety of game fish, especially lunker yellows. My biggest forkie came on a squid nest along a kelp line in Pyramid Cove at San Clemente Island with this method (cover photo – 41 pounds). The high dropper loop, meaning bait presented at least four feet from the weight, helped mitigate bat ray and soup fin encounters and performed quite well that morning. We managed one 35 pound white seabass, fourteen yellowtail from 30 – 41 pounds and a 50 pound halibut without moving anchor. Oh yeah, then we went offshore looking for other stuff and succeeded – the beauty of San Clemente Island!
You can catch a yellowtail from a southern California pier or offshore on a mega yacht, quite simply they are the Kings of California. Enjoy our sustainable resource, respect it and ensure that you are doing everything you can to sustain it and continue this for generations to come. Fish hard and often.