Anglers enjoyed a tremendous season of tuna fishing and the outlook is very strong for this coming season as well. Bluefin were still being caught in the “golden triangle” as late as December and the deluxe sportfisher Tomahawk was one of the boats targeting these tuna that weighed mostly in the 35 to 90-lb. class, with a few topping the 100-lb mark. There were also good early signs that yellowtail are moving up the Baja Norte coast and should fishable in good numbers for most of the spring season topping off at the Coronado Islands. 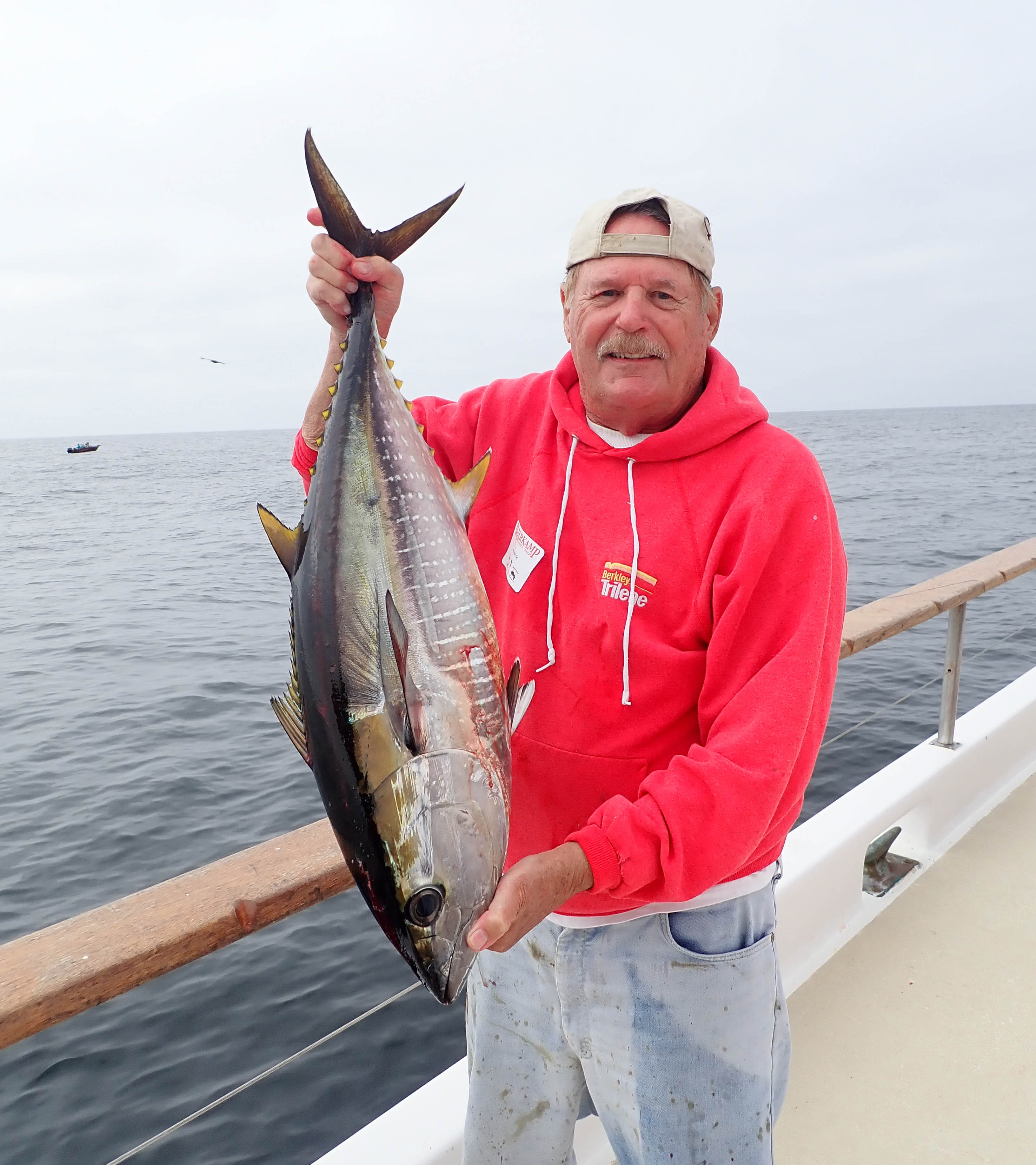 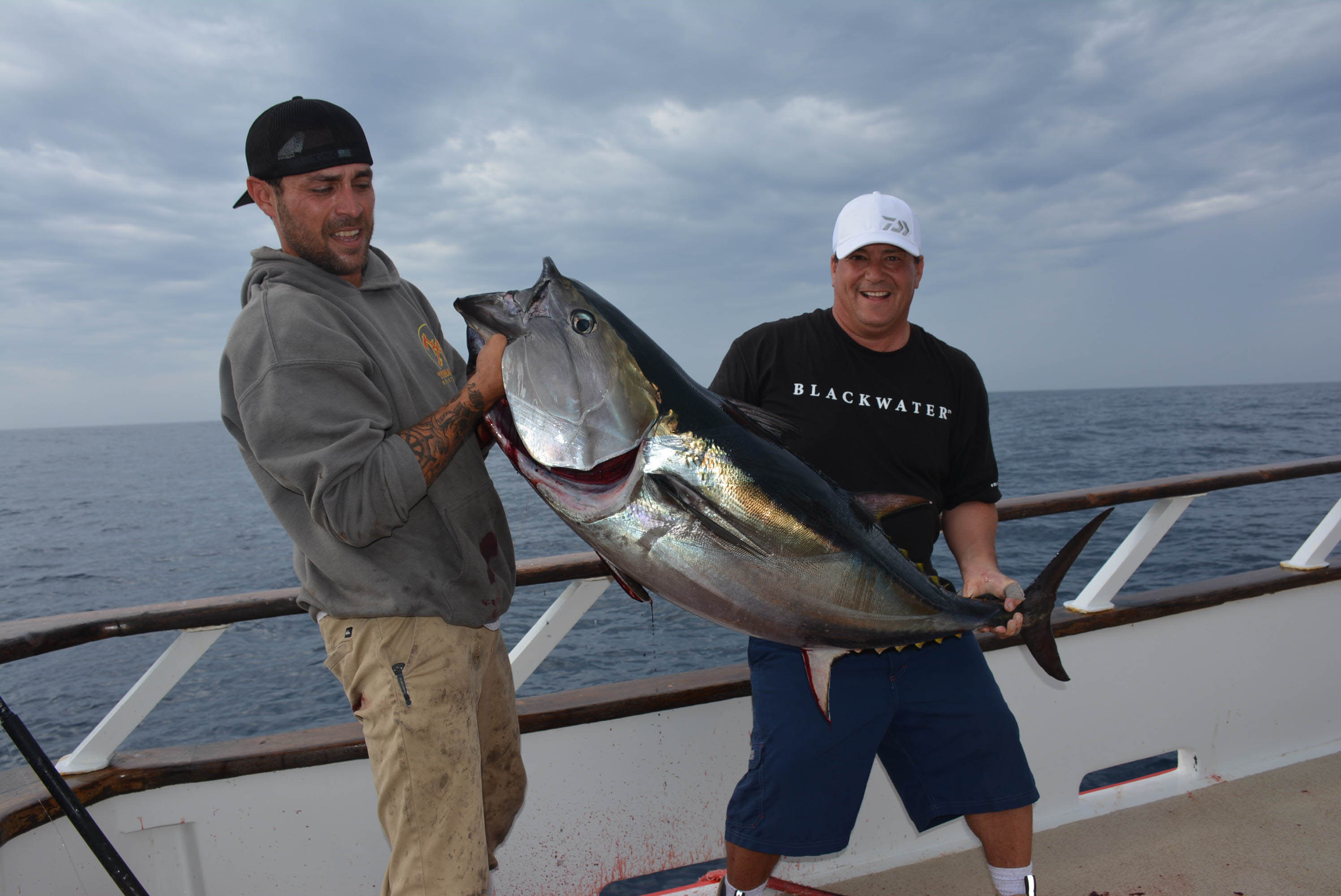 The Tomahawk is a 68-foot fishing machine that offers just over 24 feet of transom beam, making this vessel one of the better multi-day, limited load sportfishers among San Diego’s vast fleet. Not only does this sport boat fish well under most all conditions, but the spacious galley, tasty food and roomy bunks combine to make each trip a good angling experience. Add in large capacity bait tanks, a new refrigerator system in the slammer and a crew that wants passengers to catch tuna, what more could a deep-sea fisherman ask for. Last year owner Captain Eric Sauerwein invested almost $100,000 in boat work and additional upgrading of equipment to make his boat more fishable.

This saltwater angler enjoyed a couple of trips this past season aboard the Tomahawk that resulted in plenty of fresh sushi throughout the summer and into the early fall fishing season. When a tuna comes up out of the slammer at the dock it is well preserved and has been saved at a temperature that is just at freezing, but the modern refrigeration system doesn’t freeze the meat of a highly prized bluefin tuna. 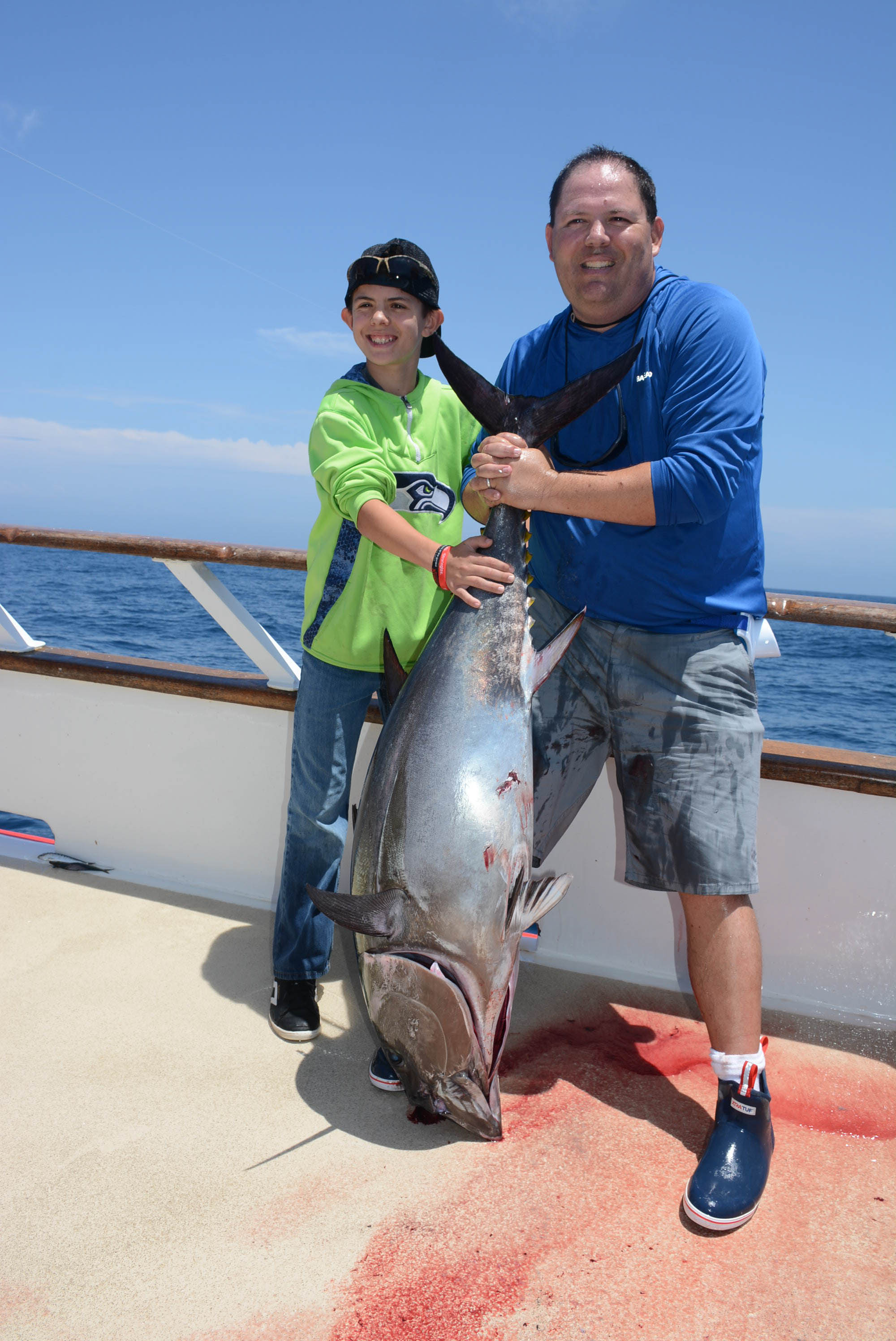 The first tuna trip on board the Tomahawk was a 2.5-day trip that was co-sponsored by Izorline and it was a trip to remember. This sportfisher departs out of Fisherman’s Landing and with a limited load of just 25 anglers there would be plenty of room at the rail during a bluefin or yellowfin tuna bite. Seas were calm, as they traditionally are during the later part of July, and the hopes of Captain Jeff Spafford were that schools of bluefin would pop up in the fishing grounds offering opportunities to cast big poppers and Colt Snipers at meatballs of boiling bluefin tuna and then slide over the school to allow bait fisherman a chance at hooking a tuna.

It took a while for the tuna to put on the feed bag that first morning, but when they did there were “foamers” everywhere you looked. Running from one spot of tuna to another just took a few minutes, as the fast Tomahawk was aggressively on the prowl. 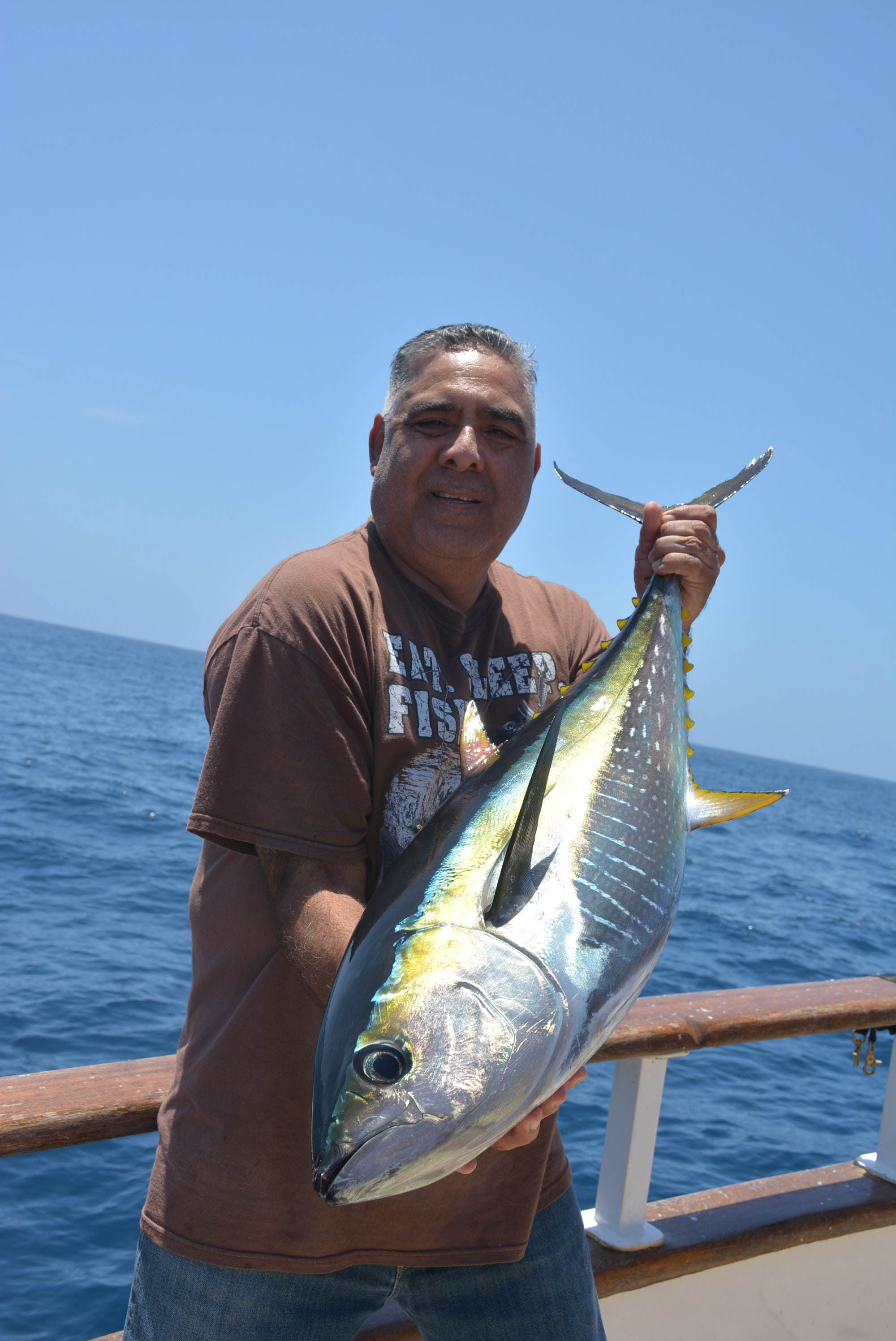 While most of the tuna caught that day weighed in the 25 to 50-lb class, there were a few bigger class bluefin landed along with a quality yellowfin tuna. The hot stick for the trip was held by Bobby “G” Gonzales of San Pedro who seemed always to be hooked up to a big  bluefin and had no problem in landing his 2-fish limit of 100-lb tuna for the day. A number of other anglers on board also landed their daily limit of bluefin, but it was Lorenzo Robles of Montclair that topped anglers by decking a 30-lb. class yellowfin that was hooked on a kite rig.

It really wasn’t a “pick bite” but anglers with the most success on both days of fishing were rigged with high-end rods and lever drag reels spooled with 80# braid and topped off with 40# fluorocarbon leader and size 3/0 Owner circle hook. This angler’s favorite tuna fishing combo is a matched set of a Daiwa Saltiga Proteus 70XXHFcomposite rod mated to a Saltiga LD30HS lever drag reel. While there is a wide selection of fluorocarbon leader material available this writer’s choice has been Seaguar ever since fluorocarbon leader was the way to go to fish for pelagics.

As the sun set the bite shut down and it was time for a shower and take a seat in the galley to enjoy the evening meal prepared by Chef Mikie. During dinner, this outdoor writer had a chance to sit next to Capt. Spafford and talk about how good the tuna fishing has been for the entire sport fleet the past few years and what he thinks the future holds for this off shore fishery.

“We are in a good trend here along the west coast reaching down into Baja Norte and clear on up to the waters off the east end of San Clemente Island. There appears to be an abundance of fin bait and with the lack of strong northwesterly winds the past couple of winters, these waters remain on the warm side. Fishing for trophy class bluefin tuna has been off the charts thus far this year for anglers fishing aboard the Tomahawk and I think that trend will continue well into the late fall months. Each trip has been rewarded, if not with a landed cow bluefin, at least a few anglers on board have been tested for hours until finally loosing a monster tuna,” stated Spafford, 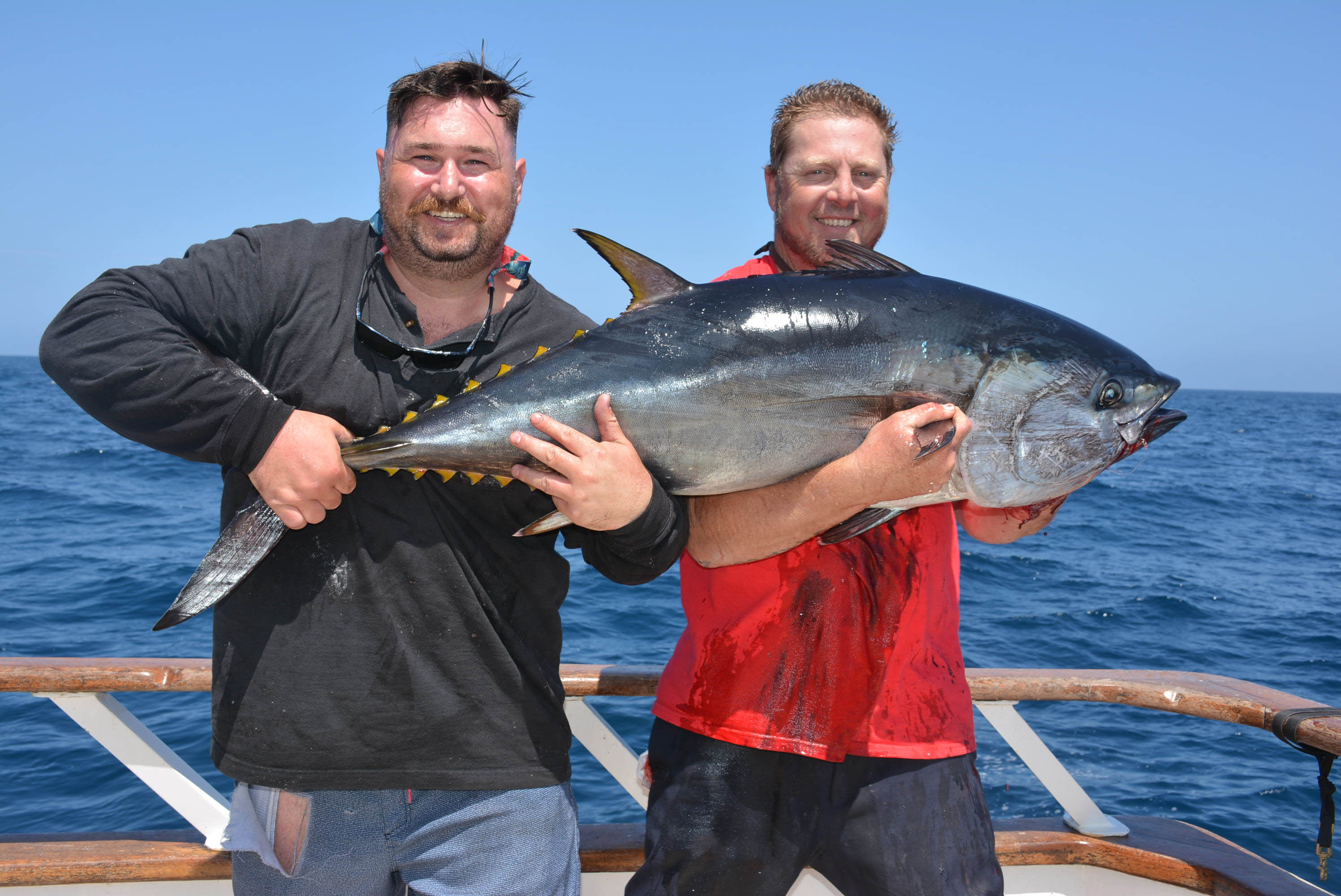 Spafford then went on to add, “Our off shore fishing program of offering 1 to 3.5-day fishing packages, with limited loads, has been paying off for anglers. We have the ability to move around during longer trips to the fishing grounds and when we have to make a run to a new spot, we will try to do it while passengers are asleep in their bunks. This night travel allows us to be right on the fishing grounds at day break, often a good time to kick off a great day of tuna fishing. As to what next season will offer up in the way of off shore angling, I would hope that the bluefin and yellowfin stay around. I would also like to see more kelp patty fishing for yellowtail and a return of those large schools of dorado that were around for a long time a few years ago.”
The Mission Statement for the Tomahawk is that Safety Is Their #1 Priority. The Tomahawk is a United States Coast Guard inspected vessel. She is cleaned and maintained to ownership high standards. According to co-owner Sauerwein, the entire crew takes pride in attending to the structural elements, numerous systems and procedures that are vital to the reliability and safety of the vessel. On the Tomahawk anglers can simply focus on enjoying their fishing experience in a safe, clean and organized environment.

For more information on booking a multi-day off shore fishing experience log on to their web site at onfo@tomahawksportfishing.com or call Sauerwein at 619-909-6079.