Three Generations On The Mountain 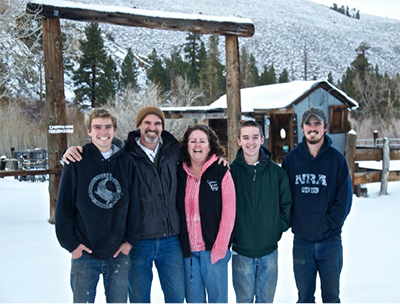 There’s a place up in the Eastern High Sierras that a family by name of Cluff has owned and operated for the past 30 years. This family friendly resort is just west of the town of Bishop. Nestled in an aspen grove, CVR is surrounded by spectacular mountain peaks. It’s a haven for fisherman with well stocked lakes and streams. Cardinal Village Resort has been enjoyed for seventy years as a family run vacation destination and is still going strong today. The rich history of this place goes back in time to an era in which the village was alive with gold mining. It was once owned by Gaylord Wilshire and frequented by writer Jack London and other notable celebrities. The rental cabins today are the actual cabins that the miners built and lived in over a century ago when the gold mine was in operation.
The mine closed in August 1938 and the miners moved on. The place sat empty for eight years but in 1946, the McLaurin family purchased the run down property and turned it into a full scale fish camp. Cardinal changed hands about every 15 years until Hal and Barbara Cluff became the proud owners of the resort in the fall of 1985.In that first summer a young man, by the name of Marlon Meade, introduced himself to the Cluff’s. Marlon really hit it off with Hal and Barbara. He recalls “The Cluff’s hospitality makes everyone feel like they are good friends”. 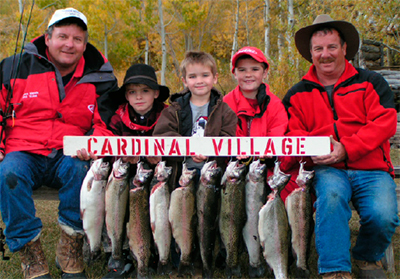 Marlon Meade/Dave Finkelstein and the 3 Cluff kids when they were young holding 52 lb. limit from South Lake

After many years of building Cardinal’s clientele, Hal and Barbara decided it was time to ask the next generation of Cluff’s to transition into the family business. Their son Ken, had worked in the resort on and off for several years. Ken decided to settle down and found his soulmate, ShaleAnn, a local girl originally from Big Pine. They married and lived for a short time in the Seattle area where they had two sons, Ezra and Asher. Ken and ShaleAnn purchased Cardinal Village Resort in the year 2000 and welcomed a third son Aidan, in 2001. Hal and Barbara gave Ken and his wife a great foundation for continuing with the family business. The three sons were taught at an early age to contribute to the daily running of the resort and always had chores to do that involved things needing to be done for the business to prosper. Cabin cleaning was a daily reminder to their children that this was a family run resort. This included Hal and Barbara, who even today, fill in the gaps when help is needed.

The Cluff’s have always made always made an effort to invest back into their business. They have made numerous renovations to the cabins, by adding more modern amenities and improvements. The family came up with some interesting ways to improve on the use of the resort by adding a large Lecture Hall complete with audio-video equipment. This hall is used frequently by the community as a meeting hall, church and wedding venue. The cafe’ has gone through several upgrades in recent years including a deck for outdoor dining and free wifi service. During the fishing season breakfast and lunch are served seven days a week.

Adding more charm to Cardinal Village, the Cluff’s have built a wood fired pizza oven adjacent to a small stream and complete with tables and soft lighting in a private area behind the Café. During the summer season, Friday and Saturday pizza nights have been a big hit with the locals and visitors alike.

The newest addition for 2016 is an activity center where guests, young and old, can check out lawn games and DVDs as well as take classes on fly-tying, plant identification, crafts and such. Rounding out the activity list is horseback riding. During the summer months horseback tours of the old Cardinal Mine are offered by Braveheart Trails, run by local resident TessAnne Moran-Green a friend of the Cluff family.
It’s easy to relax here as you watch the resort owner’s dogs meander around the place as well as the friendly chickens that may wander the resort during daytime hours delighting youngsters with perhaps their first encounter with “wildlife”. The place is very family oriented.

Hal and Barbara Cluff in the early years

The Cluff family has successfully run Cardinal Village Resort for thirty years and counting. We would like to congratulate them and thank them as well for giving us all such wonderful memories to cherish for years to come and hopefully we can share in more memories with yet another generation of Cluff’s!