It was a day that will never be forgotten. A day that changed my son’s life. Jaxon Lane AKA ”Badger” is my 10 year old son that keeps bringing his passion for fishing to the next level. Last year I took Badger on three trips in hopes to land a giant Bluefin that ended with multiple blow ups, but no hook ups. We had to wait for this year’s season to get going again. On July 1st the opportunity presented itself to go and give it another shot. I gave my buddy Shannon Perkins a call to see if he wanted to join us and he was in. 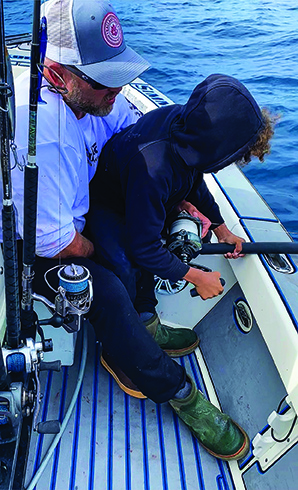 If I am going to take Badger I have to make sure the weather is good and that I have multiple people on the water that I can call in case of an emergency. Call me a responsible dad I guess. Chris Bona and Billy K were also going to be on the water so it was a go. The night before a big fishing trip is always prep night in the Lane household. As we were getting ready Badger came to me and said “Dad, I have a good feeling about tomorrow”. I smiled and agreed.
At 7am we met up with the boys at the HB Launch ramp and off we went. A trip of 67 miles put us in the zone. Once we hit San Clemente Island, a giant Flying fish jumped out of the water and flew right into the boat! Shannon swatted it down… Oh my God… are u kidding me! If that wasn’t a sign from above, I don’t know what is. Whew. 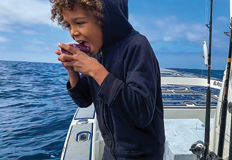 When we got there we rigged up a fresh flying fish for the balloon. It was time to play. When we got to the zone around 10 am and instantly started to see fish. Blew up the balloon and got the fresh dead flying fish out. Instantly we had a blow up and a miss… ugh!! There were foamers everywhere and I’m watching the big gear while Shannon throws into the foamers. He got hooked up and spooled in 20 seconds. Ha ha! It was great because Badger got to experience that. Billy K. who is an excellent fishermen and captain called us in, so we set up near him. Immediately it was boom, hook up and we are on.
I fought the fish and we landed her. I tried to put Badger on her but it just wasn’t right for some reason. I quickly got another bait out and 20 ft from the boat (as we are letting the bait out) we get the biggest blow up on the bait and Shannon is on. He got her in and now we have two 150-180 Lb. fish tied off and hanging on the side of the boat. How could it get any better than this? 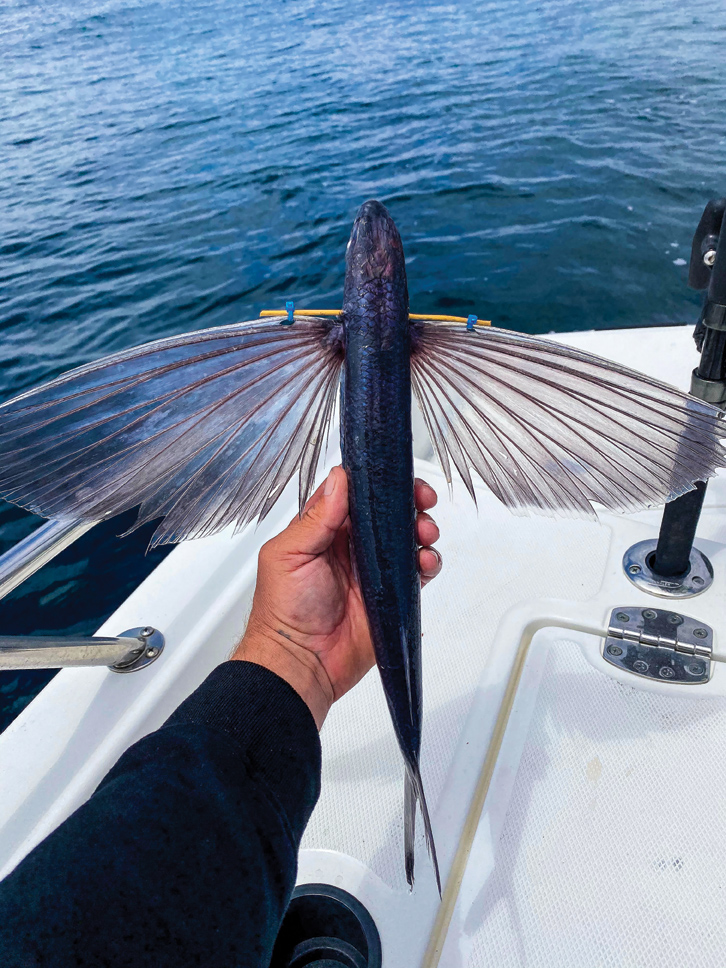 We set up a bait and let it out. Shannon, Badger and I are now getting the boat organized and decided to have lunch. As we were eating our sandwiches, we decided that we were going to call it a day because we were happy with the two fish we caught. As we are eating our sandwiches and out of nowhere…. Boom! The biggest blowup of the day. The fish jumped with a full belly out of the water. This was action. I instantly put the reel into gear to get tight on her, hook Up!! This is where it became the best day ever. 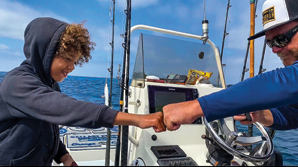 I grabbed the rod and I found a sweet spot on my boat near the bow where I keep two 22 gallon external gas tanks. I sat down on the tank and positioned the rod under my leg and laid it on the rail.. The rod is an Okuma SCT XXXH 7’6 rail rod and paired with Okuma Makaira 50. I got settled and yelled “Badger you ready?” I told him to come sit on my lap and fight this fish…I dropped the Makaira into low gear and Badger went to work… The radio chatter was on fire with all the boys cheering Badger on. Badger is giving it his all and hyping his own self up to not give up. Next thing I know , Shannon yells, “I see color!” He grabs the gaff and gets one end. We get up, Badger and I grab the other two gaffs and as father and son we gaffed her together. HE DID IT!!
The joy of accomplishment I saw on his face was something that I will never forget. The cheering from all the boys made Badger glow. The adrenaline rush was still high as we got her onto the boat. And as tradition, it was time for Badger to take the bite of the heart of his first bluefin! We cleaned the fish, gave him the heart and before he took the bite… He said “Thank You for giving us your life” and took two GIANT bites, tried to swallow it and gagged! LOL proud dad moment.. Proud that he showed his respect to God’s creation by thanking her for giving us her life to feed our family.

TIME TO GO HOME
That night I asked Badger what was his favorite part of the day, Badger replied “when all my friends were around to cheer me on when I was fighting the fish!” That’s what it’s all about folks! My 10 year old son gets it. Already. I’m truly a proud father. Proud of you Badger. Daddy loves you.