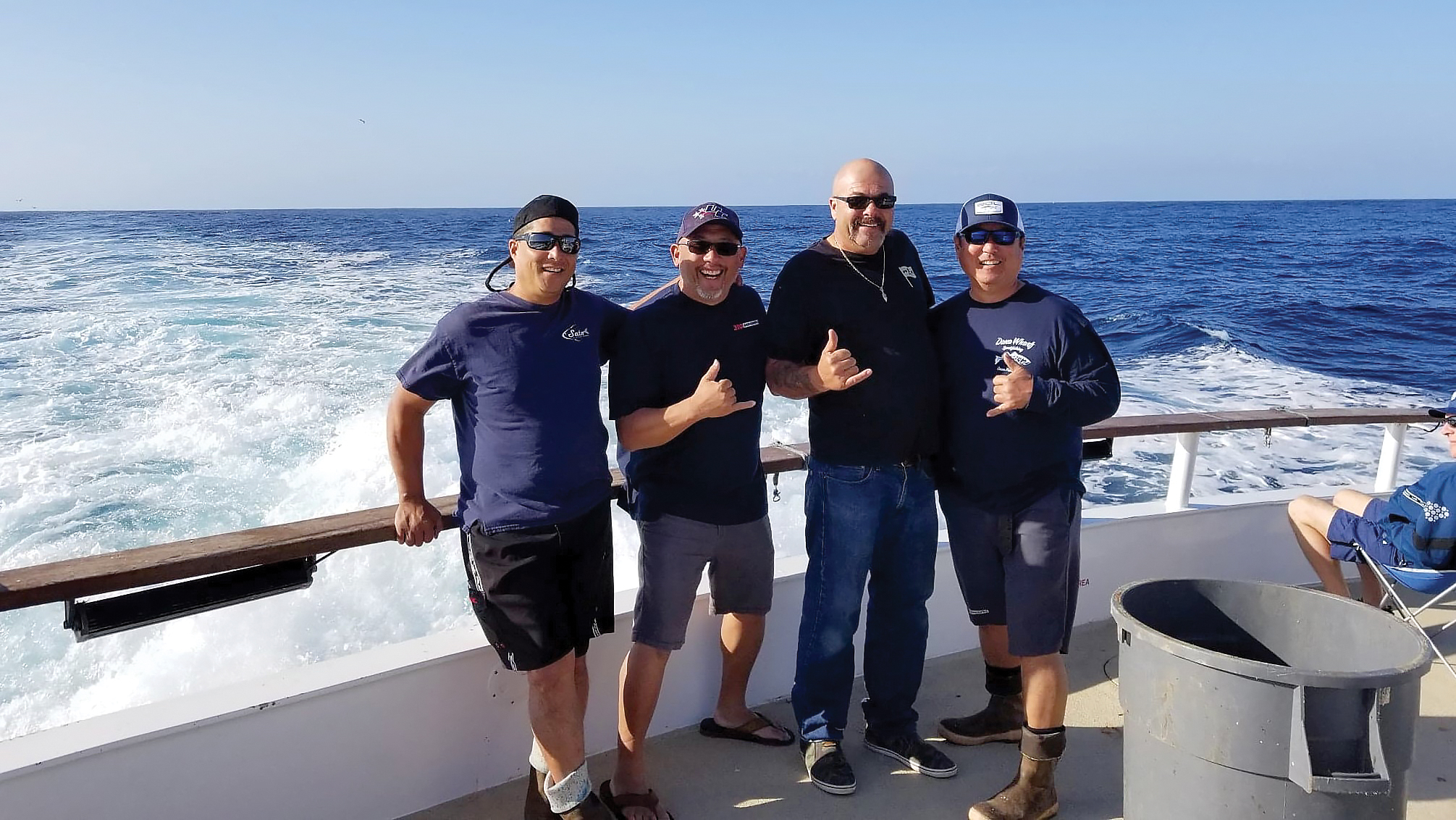 With the Holidays quickly approaching and storms looming on the horizon, it was go time for our 2nd Annual OCTUNACLUB.com SATO Memorial trip aboard the Royal Polaris.  With the usual suspects in place and with the legendary RP Crew led by Capt. Roy Rose, we checked in and pushed off by 9am.

This year’s trip was shortened to a 6- day Guadalupe Express style of trip instead of the usual 10 day due to Thanksgiving and the boat schedule. With a new school of bigger fish (100+lbrs) that had arrived, the Island is the ultimate test on the small gear ( i.e. 40-60lb). Compare it to fishing the buffer zone on a 15- day trip, with 40-60lb gear targeting the “teenagers”. Fishing for this class of fish will push your connections, experience and luck to the full test.

We checked in and were processed quickly in Ensenada before making the cross to the Island.  We arrived at 1pm the following day and took a quick look along the edge.  Capt. Roy spotted a school of black porpoises and we immediately started a drift and got to work.   It didn’t take long for the fish to get on us and within minutes we had a few hanging in the corner.  Everyone was fishing with line from 40lb – 100lb and everything in between.  The guys using an 8’-10’ top shot of 40lb & 50lb with a 1/0 or 2/0 were staying busy, while others using 60lb-80lb were patiently waiting. 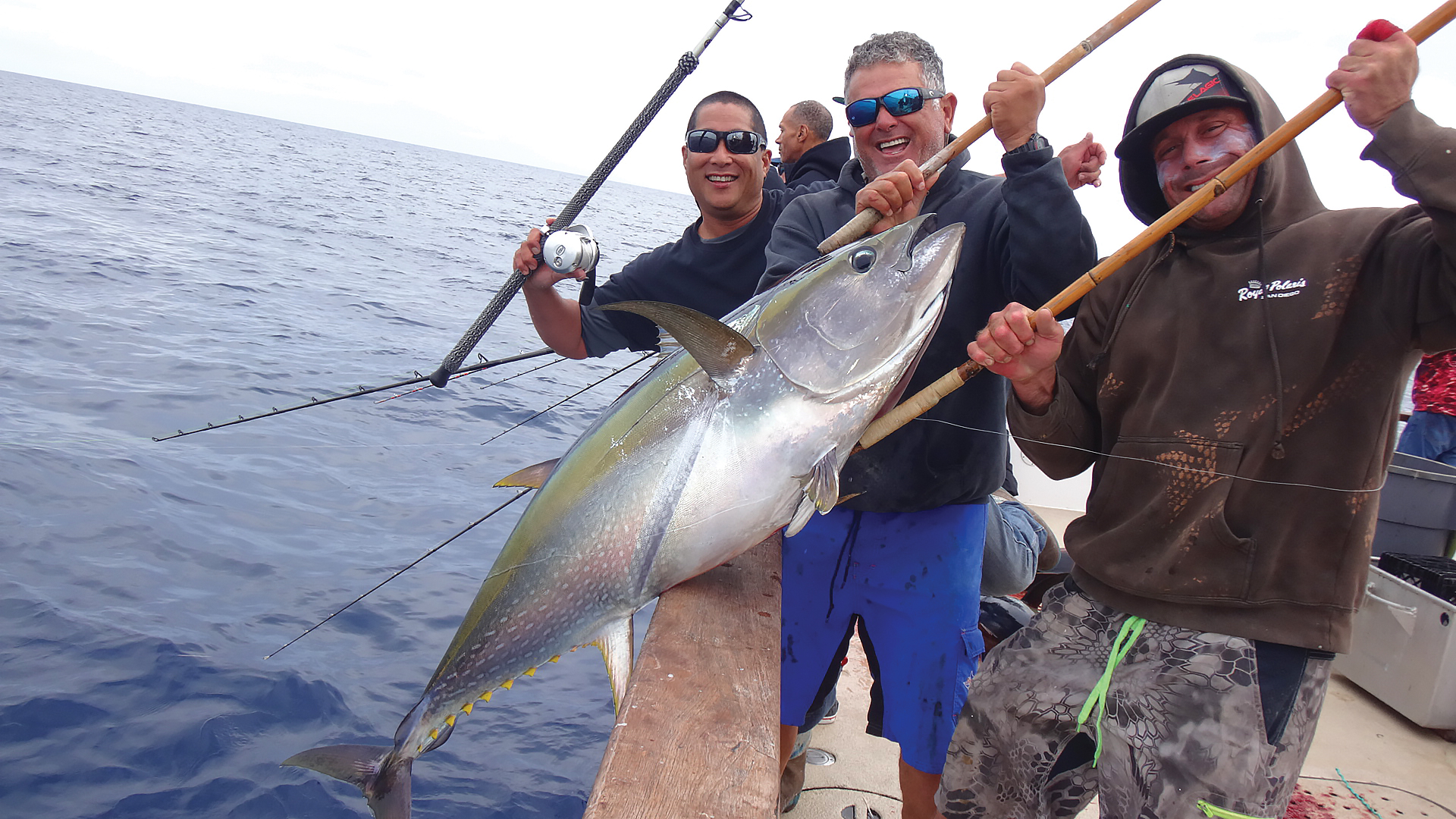 The kite started off a bit slow, but eventually the fish got with the program and started to produce.  Not knowing what was going to work, I started off using 80lb solid spectra with a 10’ top shot of 60lb with a 3/0 due to the size of fish we saw boiling up in the chum line. I had no bites for the first 2 hours, then I dropped down to 65lb spectra with an 8’ top shot of 50lb with a 2/0.  Almost immediately I was bit and hanging one on the bow. After a few minutes my line started to vibrate heavily when the fish was straight up and down.  I looked over the rail and noticed a big Mako had just bitten the tail off my fish.  Needless to say, the fish came right up and was undamaged except for a missing tail.  We only saw that one Mako and never saw another shark for the remainder of the trip.

One thing that we noticed, these fish were really ticked off and had a bad attitude for being this close to the Holidays.  They were extremely stubborn bullies and unwilling to cooperate.  These fish were wrecking angler’s gear and if you had a weak spot, they would find it and exploit it to gain their freedom.  The following morning, I double checked my drags and thought I should bump them up to 20lbs at strike with 50lb. These fish were getting bigger and if I was going to win, I would win fast. If I were to lose, I would lose fast.  I got bit just after grey light and it felt like a decent fish…..long sustained run and big tail beats, I went around the boat 1.5 times and finally got the fish to gaff in about 45 minutes with my Accurate 600N and UC80 Tilefish. It was a nice 120lb class fish. 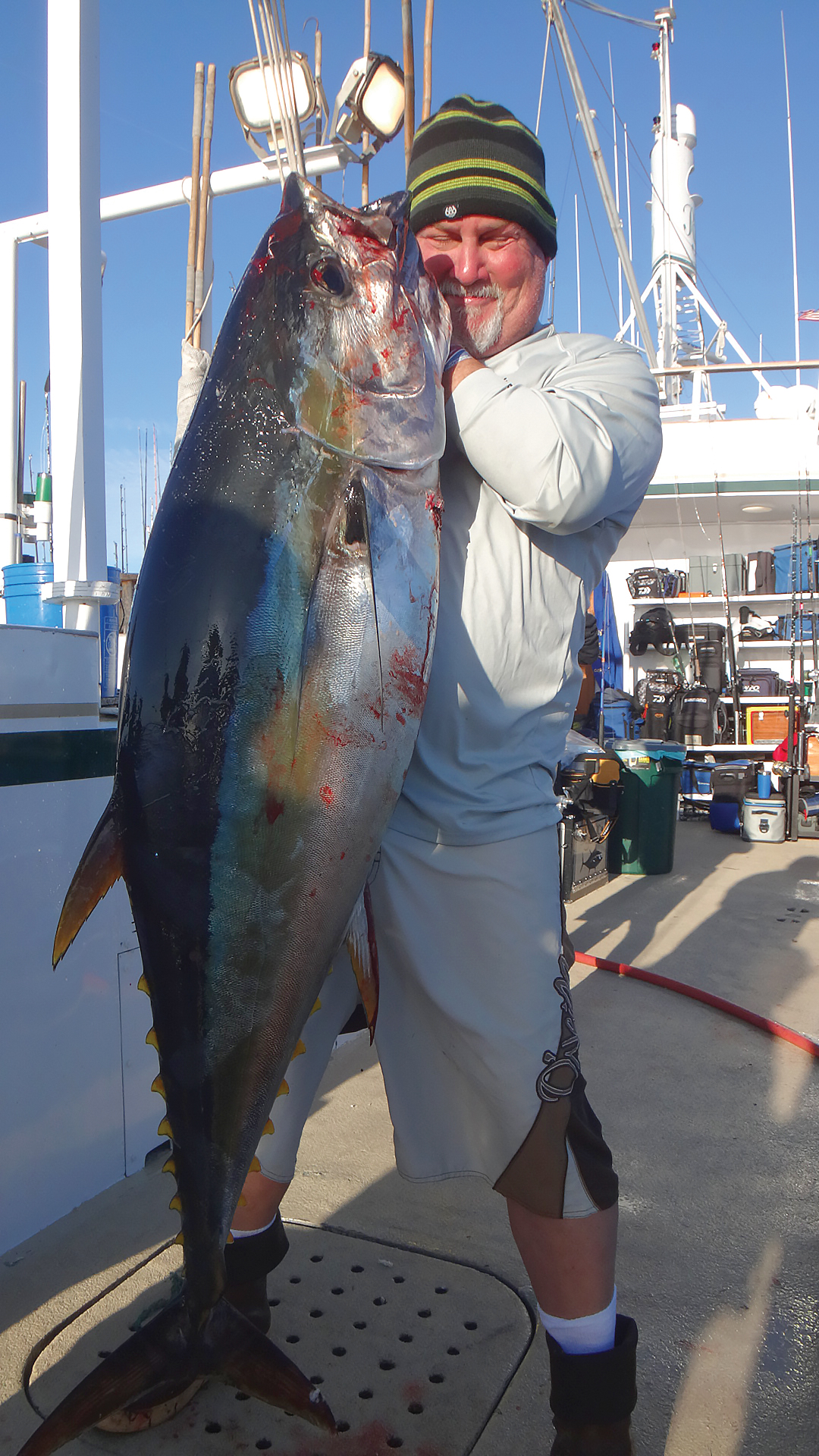 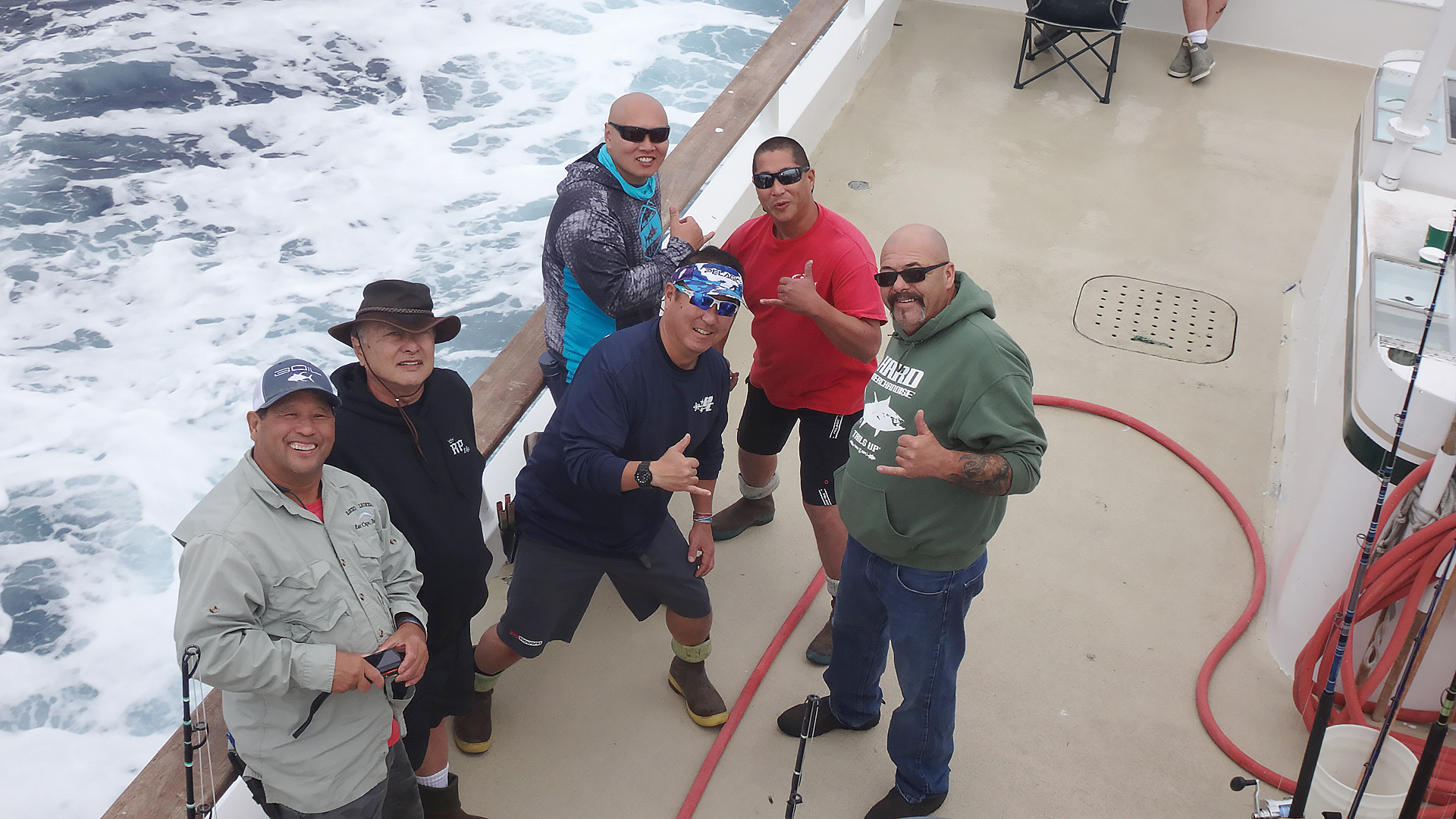 I took a break and thought maybe that wasn’t the smartest set up to use on this grade of fish. If I hooked that same fish on my ATD 30 or MAK 20 on my UC76 Viper or Centaur, that fish would have been on the right side of the wood in under 15 minutes. Thinking I just learned a lesson, I grabbed my 76 Centaur with 60lb and continued to drown one bait after another.  No bites, no action…but I was okay with that since the morning snack was just announced. Later on in the morning I took a leisurely stroll on the deck and noticed a few fish hanging…I asked myself should I go back down to 50lb to get a bite or stick with the rope? I made a quick decision, grabbed my 50lb rig and walk up to the bow. Big mistake.

A few minutes pass as Darin (aka 310RodWorks) and myself were soaking baits and chatting about how cool it would be if we could get another shot of both of us hanging fish.  Moments later, Darin’s bait got hammered and a minute later, mine gets mowed down like nobody’s business.  As we were standing there holding our rods with a big bend and watching spectra just burning off the reel, we both looked at each other and knew these were the ones we were looking for.  The long and deep tail beats just confirmed that we’re going to be in for a long fight on the small gear.  Darin was pegged with his Penn 25 Fathom loaded with 50lb and I too was in the same scenario with my Accurate 600N with 50lb.  At this point, we knew it was going to require some patience, experience and finesse to get these brutes up without busting them off. 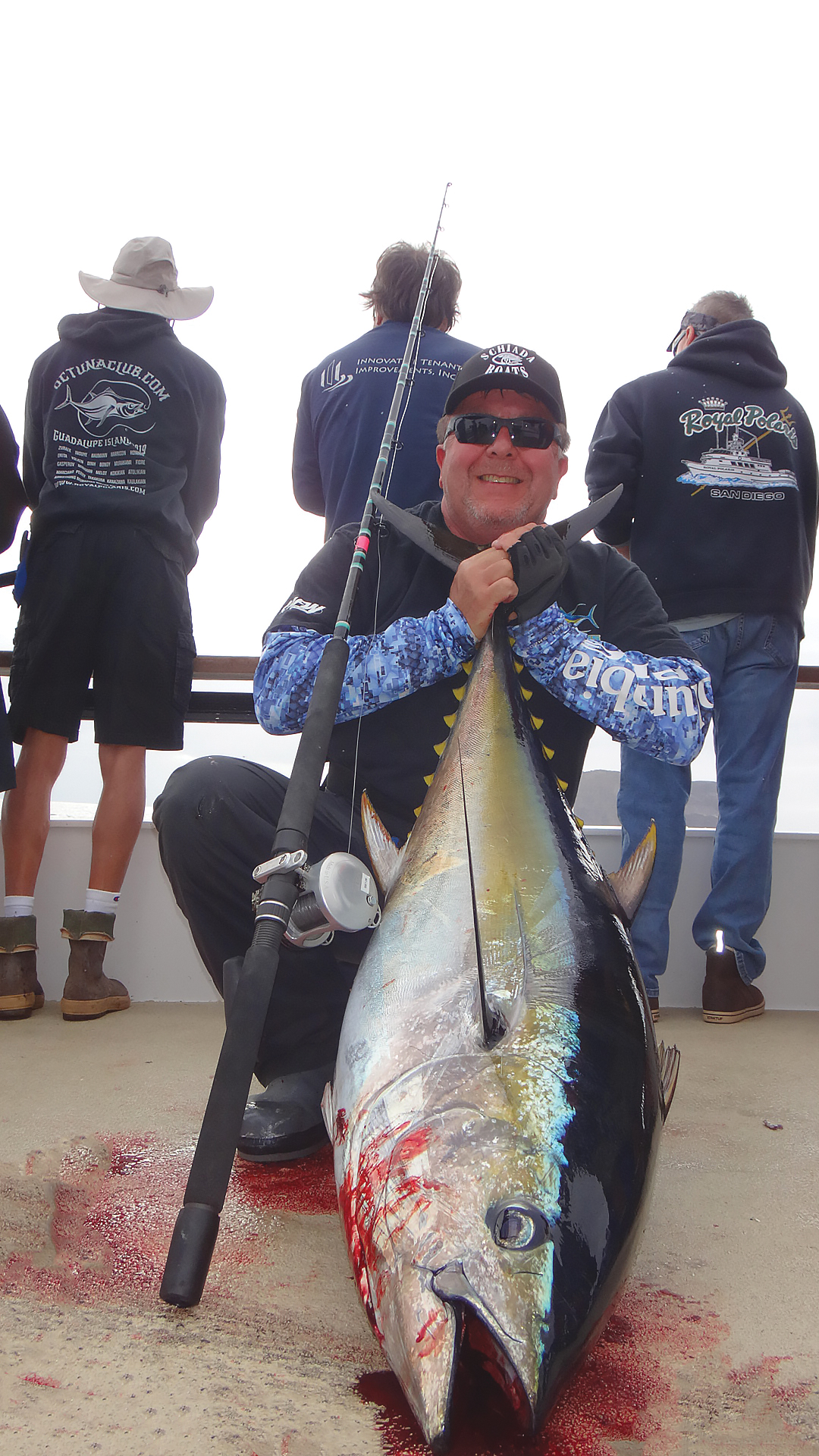 An hour had already passed and Darin and I have gone around the boat a few times already.  Then hour #2 arrives and wouldn’t you know it….Darin and I are both up on the bow again trying to wrestle these fish closer to the boat.  I wave goodbye to Darin and continue to walk my fish down to the port corner.  Finally, I get this stubborn fish straight up and down, but now I know time is working against me.  I had my UC 80 Predator bottomed out and I was leaning on it hard to get this fish to move north towards the surface. I pushed my drag close to full and now we’re guitar stringing big time.  Every inch of line that’s coming off the reel is singing some sort of tune.

At this point I know that I should be getting close to deep color, I keep the pressure on and finally I see a big chrome spot deep down.  A back and forth tug of war ensued, as this fish did not want to give in.  I would gain 3 or 4 turns on the reel trying to keep his head up and almost immediately the fish would peel off another 15-20 yards at close to full strike.  Finally, the fish started to give in, and he slowly and defiantly worked his way to the surface.   Now we’re in the final circles and Jesus calls for gaffs, minutes later Capt. Roy, Jesus and Doug each sink their gaffs into the fish and the battle is over. A fat and round teenage YFT comes over the rail.  I immediately turn around and I’m looking for Darin and somebody informed that his fish busted off at deep color after close to 2.5 hours.  Wait? What? 2.5 hours for Darin? I look at my watch and the time stamp on one of the pictures on my phone and it was 3 hours and 15 minutes earlier, WTH? Yeah, that fish really kicked my butt on 50lb gear and I was way overmatched, but I won…barely. 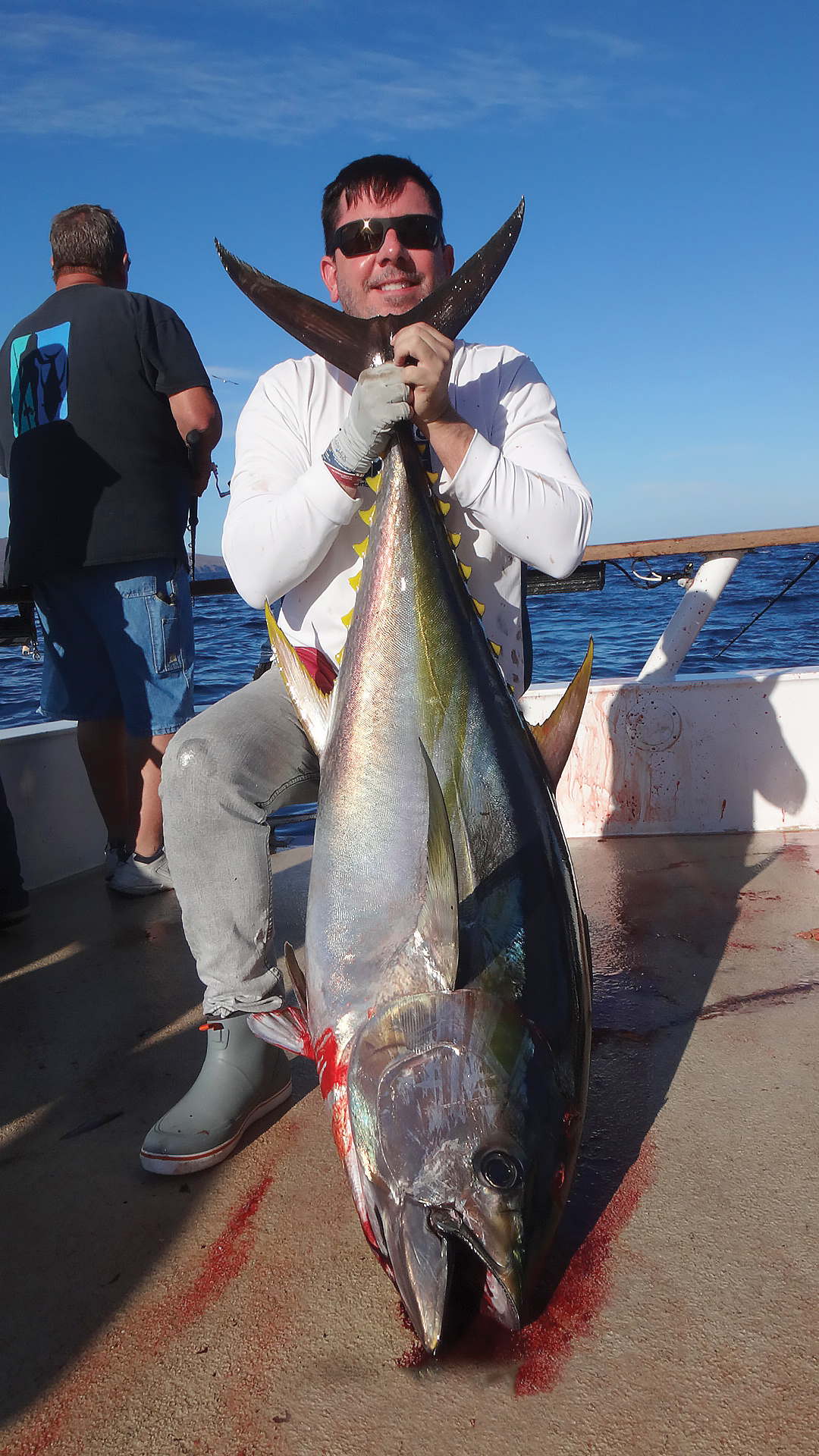 On our final full day of fishing, I noticed a good friend of mine was doing some strange stuff like tangling with anglers while on fish, 3rd row casting into a crowd, snagging other angler’s spectra and winding it into his guides and etc.  After witnessing enough, I casually walked over during a lull in the action and asked him what’s going on.  He took a deep breath and told me that he’s all stressed out because he can’t get a bite or land a fish. He went on to say that he didn’t want to look like a “chump” in front all of us. He immediately apologized and said his alter ego called “Day and a half Dave” was in full display.

Rather than pushing him off the plank, I immediately told him to ditch that attitude on the Island and don’t worry about what others are doing. We have fished many times before and I know he’s an awesome well experienced fisherman, I just had to remind him of it.  We decided to have a cold beer, hug it out and told him to hit the “reset button”.  He went down to his stateroom and then jumped in the shower to scrub the funk off and came back out with some fresh clothes, fresh attitude and a smile on his face.   We laughed and joked around and now I told him to go and put the wood to them.  With 5 hours left before we called it a trip, “Day and half Dave” not only caught his PB, he quickly put 7 big YFT in the boat with plenty of time to spare.  During one of the battles, he and I were both pinned in the starboard corner battling some brutes, but yet we found time to laugh, take a few pics together and do the robot dance listening to Soul Sonic Force’s Plant Rock.  It was pure gold and you had to be there.  At that precise moment, we both looked at each other and I told him that we were stoked that he left his alter ego “Day and half Dave” on the Island was back to his normal, goofy self and doing what he does best.  Our final day of fishing was extremely productive and intense. Every single passenger caught and fought multiple quality fish. We saw a lot of 80-110lb class of fish coming over the rail with a steady pace until everyone was exhausted and fulfilled.  After the smoke cleared, every single passenger was smiling, celebrating and fulfilled.  We all know that Brent Ikari was smiling down and put another one of his signature blessings on our trip.  We couldn’t imagine a better way to close out the 2019 Fishing Season and we’ll definitely be back to pay the Island and Brent another visit a few more times in 2020.   Thank you.  – Doug Inouye