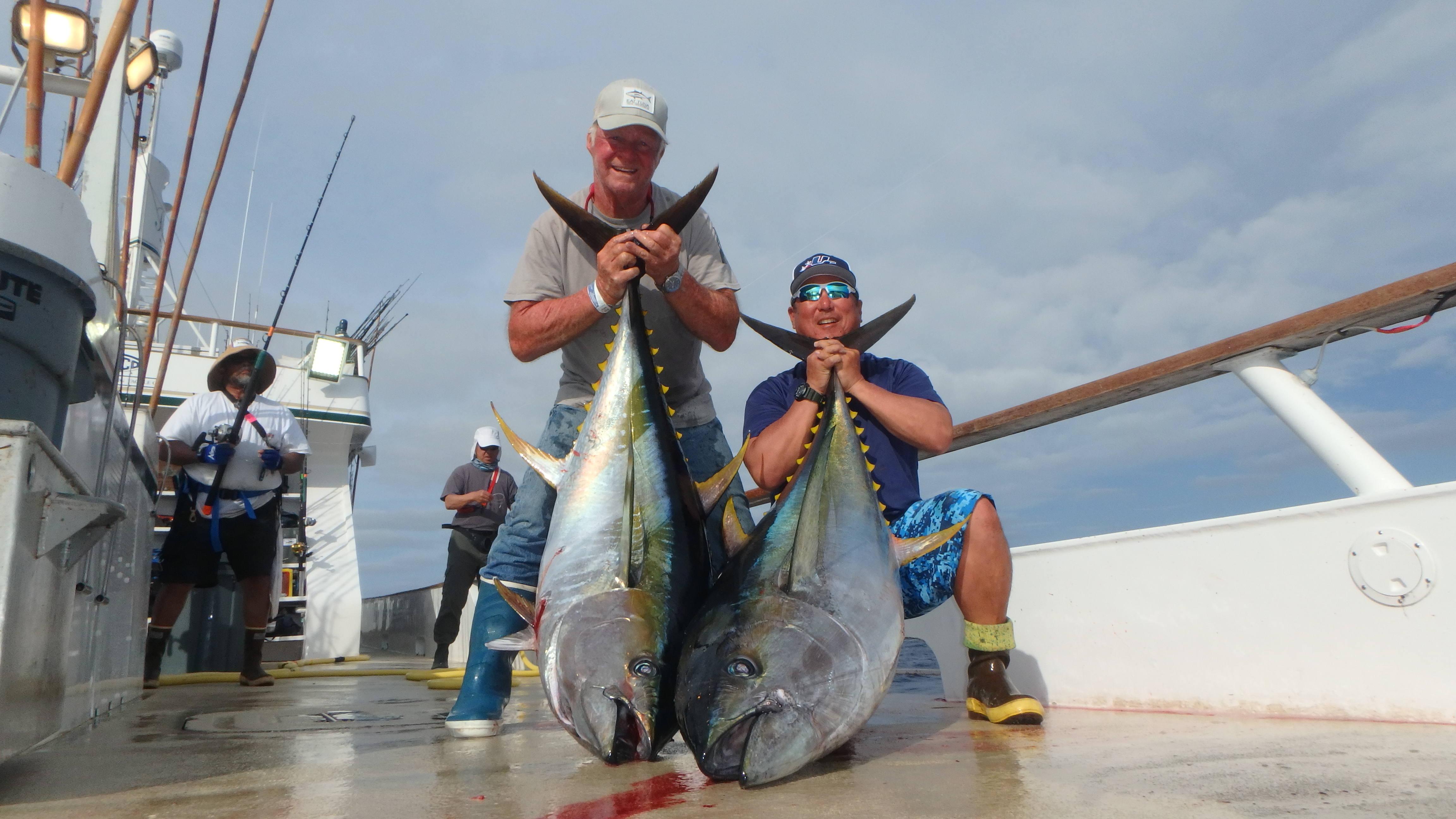 It was late April and 22 eager and excited anglers were anxiously waiting to pull away from the Fisherman’s Landing for our first destination, Alijos Rocks. Capt. Roy Rose rolled out the game plan and explained for us to get ready to fish the Rocks for some jumbo yellowtail and maybe wahoo if the water temperature was ideal. As we made the 2 days run in spectacular weather, John Collins introduced himself to the entire group and put together an absolutely stunning array of raffle prizes. The best part was all proceeds would directly benefit the Friends of Rollo organization. Everyone walked away a winner. Among the great prizes offered and that people won were brand new Avet Reels, GrafTech Rail Rods, Fisherman’s Landing Gift Cards, a deer hunting trip, Hi Seas Fluorocarbon, AFW wire, United Composites Shirts and more.

Let me rewind here for a moment to talk about our Charter master, John Collins. For those who don’t know John, he’s been a part of the long range industry since the late 80’s. He’s a walking encyclopedia of long range knowledge, history and quite possibly one of the nicest guys that you’ll ever meet and share the rail with. I first met and fished with John back in 2008 when he was working aboard the Indy. Back then, I didn’t have the privilege to sit down with him to talk about how he became involved in this industry. I wasn’t going to miss this opportunity a second time and he did not disappoint. What a great guy! 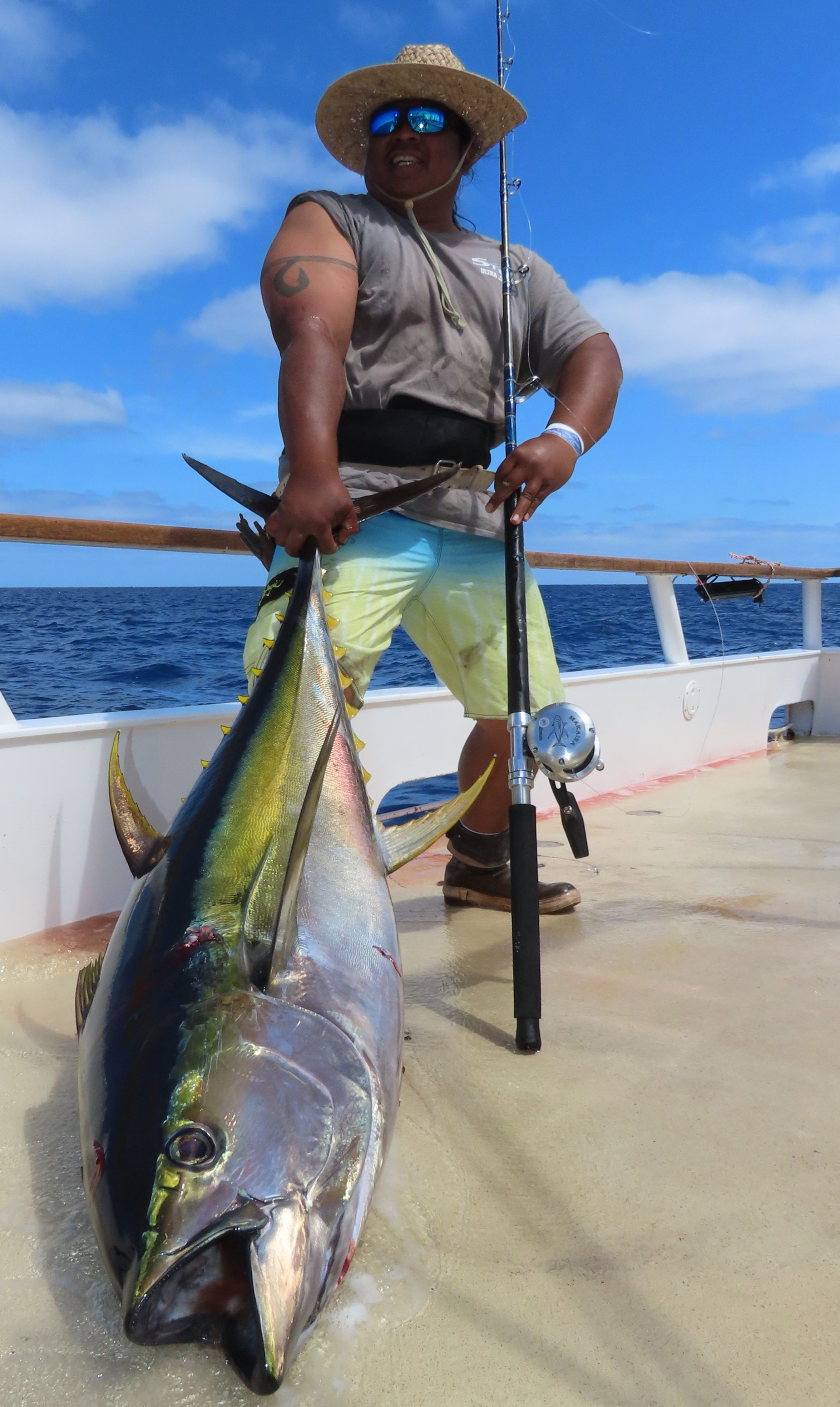 Roy Rose quote of the day – “Whatever you do….don’t look them in the eye”. 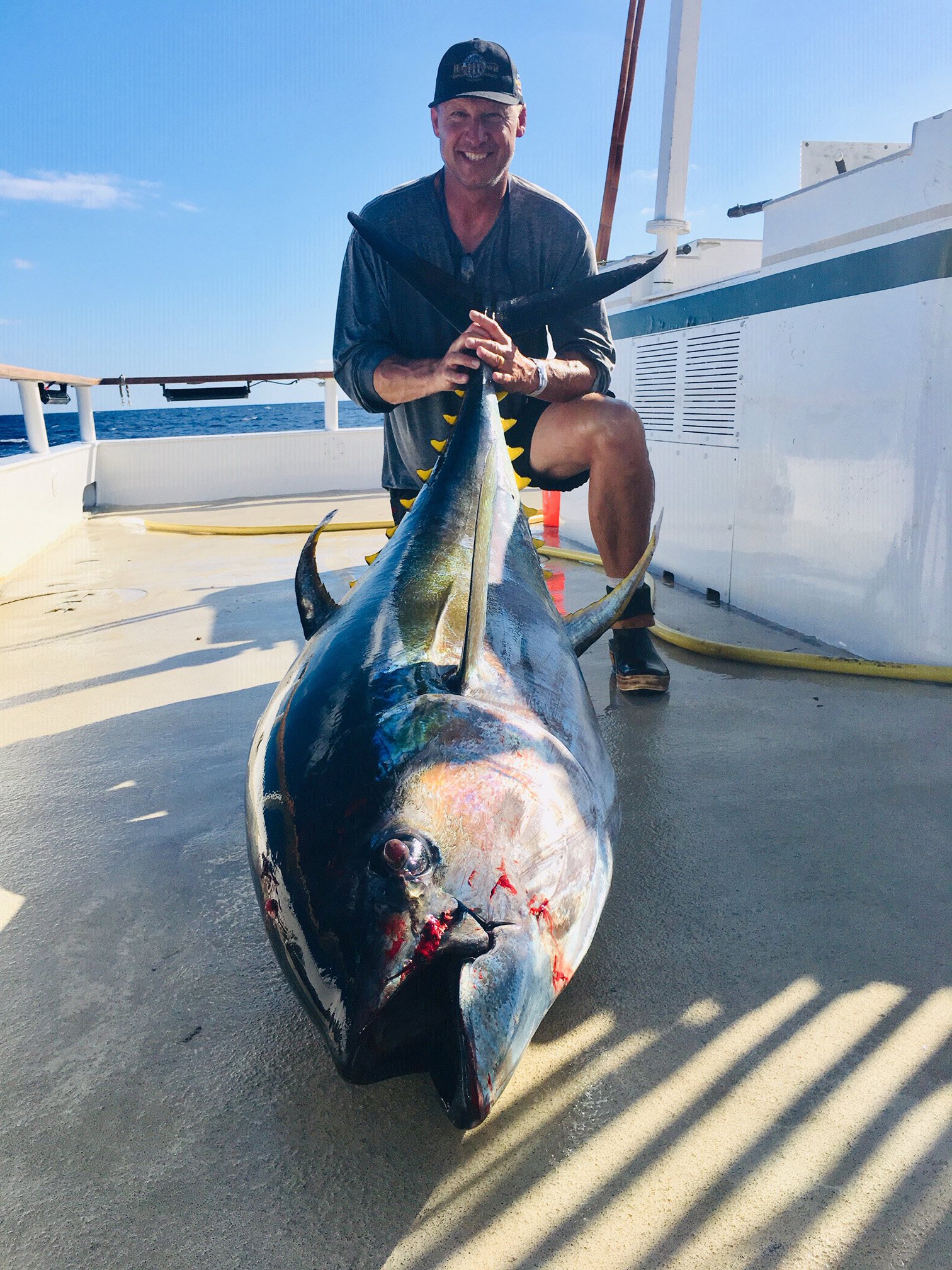 As we approached the Rocks, the anticipation was high as many us were ready to pull on some fish after 2 days of travel. Capt. Roy drove around the high spots and we put the anchor down and it was game on. John Collins, Matt Chang and myself prefer the long rods and it did not disappoint. The 3 of us were slinging the surface iron deep into the flat spots, watching these bruising yellows chase down the jig and eventually blowing up on it like nobody’s business. Yes, we sacrificed some jigs as they burned us off going over the ledge, but that’s part of the game.
Many times I would feel my line rubbing on the rocks and I would just kick it into free spool and let the fish swim out without any tension. This method worked well as I was able to save many jigs and land fish. Over the next 4 hours, a better grade fish (30-40lbrs) moved in with a bad attitude. They were chasing jigs all the way to the stern and at one point I yelled “Oh man, look at all of them right here….” Right then, Captain Roy Rose said “Whatever you do….don’t look them in the eye!” Many of us began laughing so hard, classic Roy. At noon, we pulled the plug and to continue our trek south.
Final count – 173 Yellows to 40lbs.

Next stop….The Bank.
After recovering over the past few days from sore arms, shoulders and hands…we prepared ourselves for battle once again. This time, big wahoo were the target.

Once we arrived at the Bank we started trolling and within minutes, Team #1 was screaming “hook up!!!!” A gigantic pack of marauding wahoo were eager and ready to play. The wahoo were eating bombs, stick baits, 6XJrs, Sumo jigs, Hopkins and bait….it really didn’t matter. If it was bright pink, orange, silver, gold or swimming….they would attack it. Over the course of the next few days, we managed to put a good score together on some excellent grade of 30-50lb wahoo.

Bank ATM malfunction aka “Tough Fishing”.
Now that everyone has had the chance to pull and tag some wahoo, 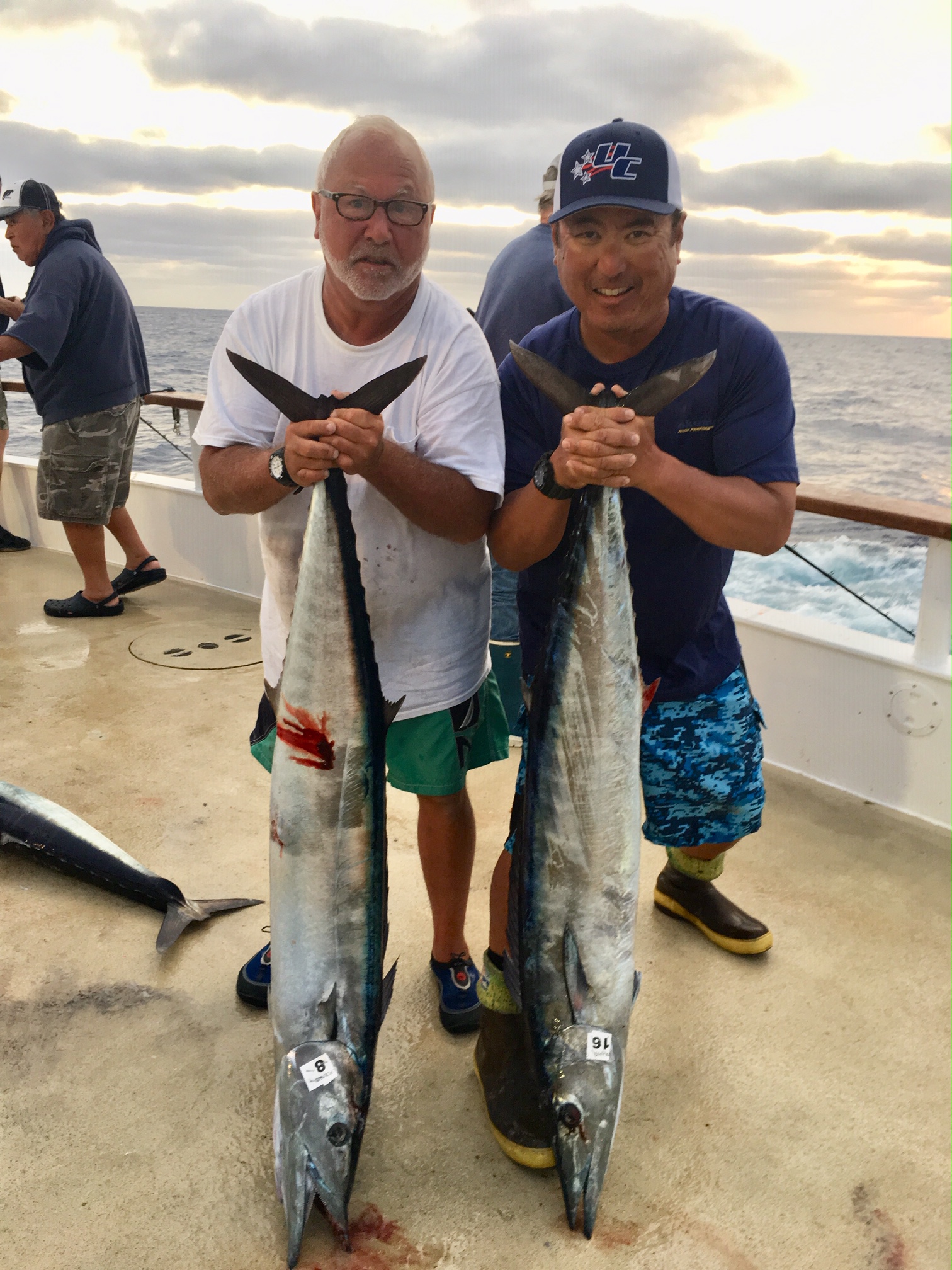 it was now time to focus on tuna fishing. We anchored up on the corner of the bank along with the XL and we would pluck away at these fish for the next couple of days. I’m not going to sugar coat anything, but tuna fishing was tough overall. The tax men and their gangster pack of colleagues made things worse. They were eating big baits, sardines, chunks….you name it, they were on it.

However, if you put in your rail time you were eventually rewarded with the right kind. On these types of trips (when fishing is tough), it’s all about making the necessary adjustments to tip the odds into your favor. Those who adjusted had a phenomenal trip in the catching department on all species. Some anglers had 1-2 tuna, some had zero and some had daily limits for the entire trip.

It was the classic case of a certain percentage of the anglers caught a majority of the fish. The most interesting part among the experienced, was the sharing of knowledge, observations and implementation. For those who were willing to listen, they would change their terminal end and would share if it produced good results. Those who didn’t adjust or did not ask, rarely got bit and began to rely on their kite rotation for a bite. However, the slow fishing didn’t impact the amount of fun that we were having. The best part about this group, we all realized that it’s about laughing and getting to meet new people…..catching fish was just the bonus.

We did manage to catch 4 cows. 3 out of the 4 came on the kite with big baits. 254lbs, 232lbs, 220lbs and 209lbs. Most of the fish we caught fly lining were in that 120-180lb class. We stuck it out until it was time to start heading back up the line. I believe we ended up with 100+ tuna for our efforts, but the yellowtail and Wahoo fishing was outstanding and saved the trip. For myself, the most productive terminal gear was a 8’ top shot of 100lb Hi Seas Bluewater Fluorocarbon with a Quik Rig 5/0 Red ringed hook connected to 80lb Seaguar Threadlock. This rig produced a lot of bites for me and a few others.

We did stop at the bluefin tuna grounds on the way back up the line and only caught 2 fish (65lbs and 20lbs) before we had to call the trip. Thanks again to the entire RP Crew – Capt. Roy, Capt. Jeff, Dharyl, Eddie, Chris, Mike, Dave and Kyle.