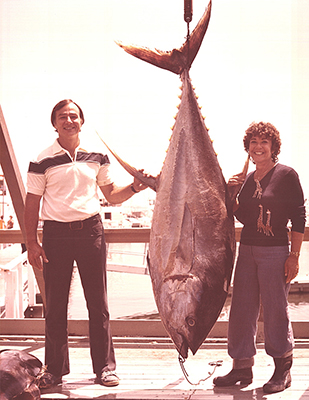 Bud and Harriet Einstoss with a huge tuna that Bud caught on a long range trip.

Fishing is in my blood. My whole life I grew up eating sport caught fish, with fish mounts on the walls and fishing magazines on the coffee table. Fish Taco Chronicles was my Dad’s favorite magazine.

My Dad was born and grew up in Los Angeles, Ca. and had spent 8 years in the Navy, 4 years active and 4 years reserve. My Dad knew all the local boats and good places to fish off shore.

I had no idea back then that the sport that my Dad loved so much was so expensive and required so much time and work, equipment, rods, reels, line, hooks, jigs and so much more. Dad especially loved to have custom rods made and wrapped just for himself and Mom. I always dreamed of having one of my own.

As I grew up, I met and married the love of my life Tim. I wanted to fish on the ocean like my Dad, However, I discovered a different kind of passion, a passion for stream and lake fishing. It was a passion that Tim had grown up with. Dad had never fished the mountains, in lakes or streams. Tim and I have been ocean fishing many times. For now we keep going back to the Eastern Sierra.

Dad was incredibly passionate for the sport of fishing. He and Mom Harriet were always planning long range trips on sport fishing boats. The Royal Polaris was their favorite. To this day Frank LoPreste remains the owner and captain.

In March 1983, Dad took the Royal Polaris’s first ever, 3 week trip, to the Clipperton Islands. The Royal Polaris was the first ever sport fishing vessel to go there and to date has been back 15 times since. The Royal Polaris had 27 passengers and 9 crew members on board for this excursion. Dad spent months getting ready. That trip was epic and the highlight of his life. The fishing was phenomenal catching enormous tuna over 300 pounds, blue marlin up to 300 pounds and black marlin up to 600 pounds. Dad caught a world record yellow fin tuna. It weighed in at 322 lbs. He won the jackpot for that fish! 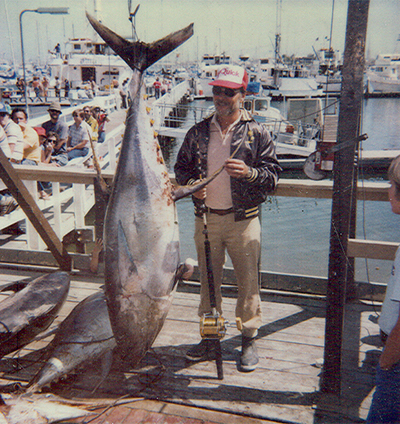 Bud Einstoss with another successful catch of tuna.

At that time it was a world record! He also caught the 2nd biggest fish as well, weighing in at well over 200 pounds. His fishing was so prolific he had to call Tim and I from Cabo San Lucas to rent an enclosed 1-ton U-Haul truck to transport his haul home. We met him at the docks at Fisherman’s Landing in San Diego, Ca. We were there when the boat arrived. After 3 weeks, we didn’t recognize him. He was so tan, and he had grown a beard. Dad said he had an amazing trip. After the trip, Dad packed our freezer and fridge full of fish. We had so much fish that it took us months to empty the freezer! On top of that, Tim and I were invited as guests by my parents to the 100 lb. club award dinner at the home of Frank LoPreste in San Diego so that we could meet Dad’s fishing buddies and the crew from his trip.

In 1997, my Dad took another “Epic” trip of a life time. Dad and Mom went on another long range trip on the Excel this time. Pat Cavanaugh was the captain. The Excel was near the cross, south of San Diego and the Baja Peninsula. My Dad scored a Pure Grand Slam for the Eastern Pacific there. He took all five species of tuna, (albacore, big eye, bluefin, skipjack, and yellowfin)! topped off with a dorado. This hadn’t been done for over 10 years! I just recently spoke with Bill Roecker, a well known writer and columnist, who was on that epic adventure. He said to his knowledge the Pure Grand Slam has not been done since Dad’s. Bill made a DVD on this trip. It’s called The “Grand Slam” by Bill Roecker. 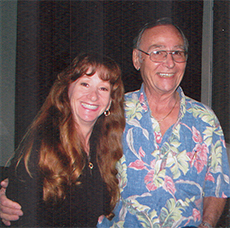 The author with her father who gave her the gift of loving to fish.

Dad and Mom seemed to always have so much fish. They had fish in the freezer. They had smoked fish in the fridge. They even canned their own tuna. They sported their own label. “Caught and canned by the Einstoss’s” There was never a shortage of fish. Dad always made the most delicious cioppino with huge chunks of different species of tuna. My Dad loved to smoke his fish after a long range trip. Often he would smoke part of his catch hardest time in my life. I wanted to share with you how amazing it was growing up with a man who truly loved the sport of fishing. My Dad loved to fish and provide good food for his wife and 4 kids.

After my Dad retired it was never like that again. Due to health issues the fishing became too hard for him. My older brother Mike goes long range fishing now. He supplies our family with all the fresh caught fish, so that Dad never had to stop eating the fish he loved. Reading the fishing magazines and seeing our pictures in them brought him great joy. Dad would even joke around telling me his bait was bigger than the trout I had caught.

I hope some day to catch that big tuna and feel what Dad felt back in the day.
Tight lines forever,
Fish Story Lori