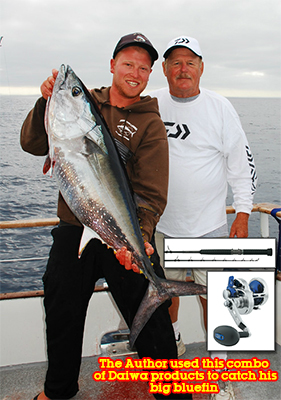 For the record book off shore fishing for the 2015 season was spectacular in San Diego. Not only did giant bluefin tuna show up here in inner waters to provide big game anglers with a chance to catch a fish of a life time, but there was quality fishing for yellowfin tuna, yellowtail, dorado, Wahoo, skipjack, along with five species of billfish and other warm water oddities that traditionally only are found off Baja and waters to the south.

Anglers aboard the Pacific Star, under the helm of Captain Mike Bullard, enjoyed success on most every trip out to nearby fishing grounds. By far multi-day trips on this deluxe sportfisher were very productive allowing anglers to fish for a wide variety of pelagics over the course of a 2.5 day trip, while one day trips also paid off with excellent catches of bluefin, yellowtail, dorado and school grade yellowfin tuna.

This outdoor writer had booked a 2.5 day trip on the Pacific Star for mid-July while attending the Fred Hall Long Beach Show in hopes of getting in on a mid season bluefin tuna bite. The word was already spread across the ocean that Mexico bluefin tuna would be off limits to sport boats, which would put a big hurt on the previous year’s great bluefin tuna fishing at the tuna pens. At the time of booking this trip the yellowfin and yellowtail bite was still going on at the Cortez Bank, but big bluefin tuna had not yet showed up in nearby waters.

To say the least when the giant bluefin did begin to bite I was a little worried about how long the bite would last and whether or not I wanted to move my date up a couple of weeks to ensure a successful bluefin tuna trip. Unfortunately, other anglers were eager to get in on the good bluefin tuna fishing and the Pacific Star was booked solid for nearly the entire summer fishing season. 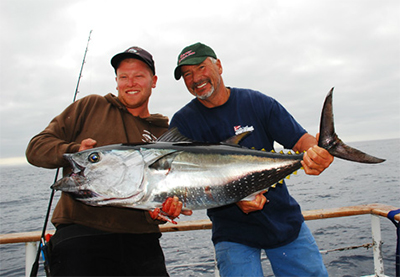 BRUTE BLUEFIN TUNA – Big bluefin tuna were around last summer and the Pacific Star got into many good stops. Pictured are (r) Captain Mike Bullard and first deck Matt Huffer with a 60 lb. bluefin tuna.

An early arrival at Seaforth Sportfishing Landing allowed for an opportunity to see fish cart after fish cart pushed up the ramp at the landing with big tuna tails sticking out and excited anglers waiting to have big tuna weighed in to settle jackpot money.

It would be a quick turnaround for all sport boats at this landing and Capt. Bullard had fine tuned his entire crew to get the Pacific Star restocked with provisions, bunks changed, the deck cleared in a timely manner to allow for an on time departure. For most of the season bait was a big issue in that demand seemed to overpower the ability of the bait boats to catch enough sardines and anchovies. Such would be the case for carefully loaded sardines, some mackerel and a few anchovies. This fin bait looked fine at first in the three main bait tanks but it was not cured and only a few hours earlier had been transferred from the bait boat to the receivers in the harbor. Not only was bait not allowed time to recover from net to net, there was a pretty big change in water temps that would also affect our bait and it would be a pretty bouncy ride out to the fishing grounds.

The Pacific Star was on its GPS numbers at gray light with a few marks on the sonar indicating tuna under the boat, but they didn’t want to bite. Steady chumming finally produced the first boil of the morning outside live bait casting distance, but within reach of Rich Francis of Cibola, AZ who was casting a blue and white Tady Jr. jig which got bit on the sink. The first fish on deck was a quality 28 lb. bluefin and then a steady pick on bluefin began. It was not a wide open bite, but over the course of the morning there would be at least 2 or 3 hookups going on at the same time. 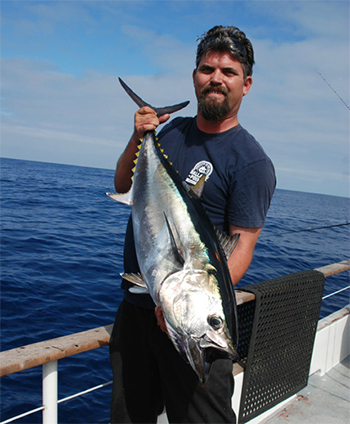 ONE QUALITY TUNA – Travis Tiglio of Oceanside holds up his bright bluefin tuna caught on live bait aboard the sportfisher Pacific Star.

As the morning progressed the size of the bluefin being hooked increased with a number of bluefin weighing in the 40 to 45 pound class coming over the rail. Our supply of live bait was hurting and many anglers were switching over to casting or yo-yoing iron in hopes of getting bit. This angler had landed a couple of school size bluefin, but that big bluefin tuna had not yet bit. It was time to ask for one of the last “crew baits” in the tank and it was carefully netted and handed to me. That sardine was pinned on a size 3/0 Owner J hook, tied to 30 lb. Seaguar fluorocarbon leader, and using an underhand cast the bait would not be as traumatized as with a standard overhead cast.

That bait did what I had hoped for in a “butt hooked” bait and immediately swam down. The bite was subtle, not aggressive, as line spooled off the smooth Daiwa Saltiga LD30 reel. It was a big sardine so I let it pull a little more line off the reel before setting the hook with the aid of the matching Daiwa Proteus 76MHF composite graphite rod. The drag had been pre-set at 18 lbs. and preformed well as that tuna dove deep, circled the Pacific Star at least 3 times, requiring deckhand assistance around the anchor and winch. At color the big tuna glistened in the aqua blue water with Captain Mike and first deckhand Tanner Huffer standing by with gaffs. The last circle brought the bluefin tuna to the side of the sportfisher and it was gaffed in the head by a very knowledgeable skipper.

When the bluefin came over the rail everyone admired its mass. It wasn’t in the 100 lb. class but it sure topped any other tuna that had come on board that morning of steady bluefin action only about 20 miles off Oceanside. With our supply of bait limited Captain Bullard opted to look for a fish holding kelp and troll in hopes of finding a hungry school of yellowfin, yellowtail or perhaps a dorado on the troll.

There was a report of good yellowfin tuna and dorado fishing in Mexican waters to the south, but with bluefin tuna in the “slammer” Capt. Bullard opted to stay out of those waters despite the good reports being aired of limit catches. Day two saw some good tuna fishing on both jigs, top water plugs and some even on the poor grade of fin bait still in the main bait tank. It all had already come together for the 24 anglers on board the Pacific Star that would dock the next morning to unload a quality catch of tuna.

Planning ahead to the 2016 tuna season it’s looking very promising again. Tuna bit right up until November when the first major storms of the winter turned the ocean over, but right after the first of the year yellowtail showed up again well within one day range. Now that Mexico has opened up fishing for bluefin tuna with a daily catch limit of 2 fish per rod a day, with multiples of the 2 fish limit allowed on two and three day trips, booking a trip early would be highly recommended. To book a trip on the Pacific Star log on to their web site at pacificstarsportfishing.com or call the office at 951-302-9826.

Good fishing and I hope see you on board the Pacific Star next summer during a wide open bluefin tuna bite. 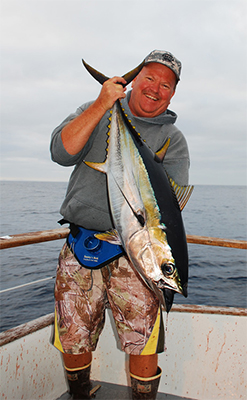 ONE HAPPY PACIFIC STAR ANGLER – Rick Francis of Cibola, AZ was a very happy angler after landing this hefty tuna on a jig aboard the sportfisher Pacific Star.