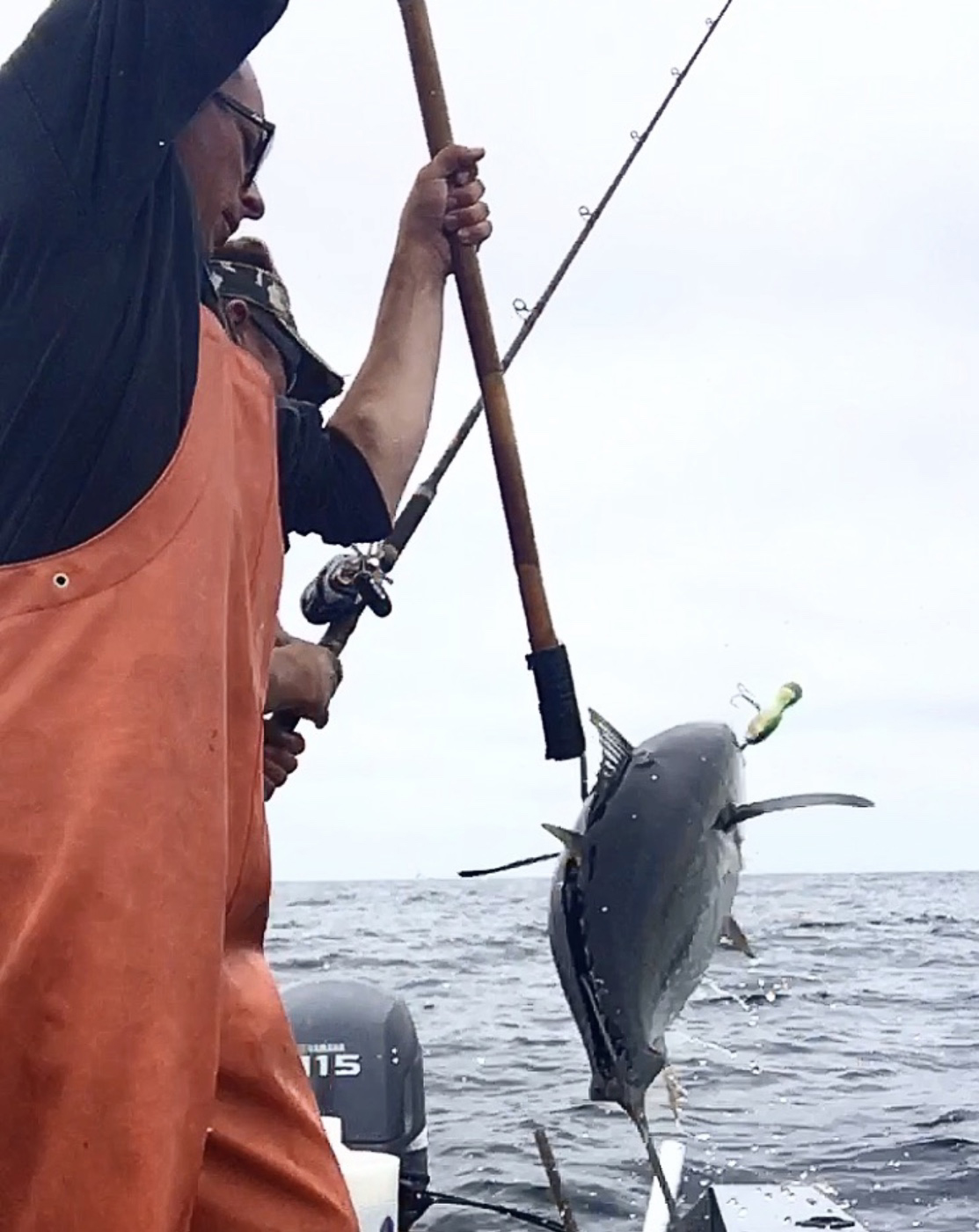 When out on the ocean, on any given day you can stumble upon a juicy piece of kelp. It may be as large as a car, and it may be as small as a trashcan lid. Regardless the size, the paddy you have just found has the potential to hold fish, and a variety of species at that. From yellowtail, to yellowfin and bluefin, to Dorado, these fish have all been known to use these floating pieces of kelp in what seems like the middle of no where, as a “rest stop” as they cover massive amounts of water in search of food and forage. Many times, sliding a bait back on the paddy is necessary to get bit, while other times, the fish are quite willing to eat an iron or some other sort of artificial bait.

Regardless of where I’m fishing, top-water is without a doubt my number one bait to try first. That’s if the fish are willing to eat it of course. Whether it’s a popper, a surface iron, or some sort of walking bait, the intensity of the blow up and the fight that ensues shortly after is one that can’t be matched in my opinion. 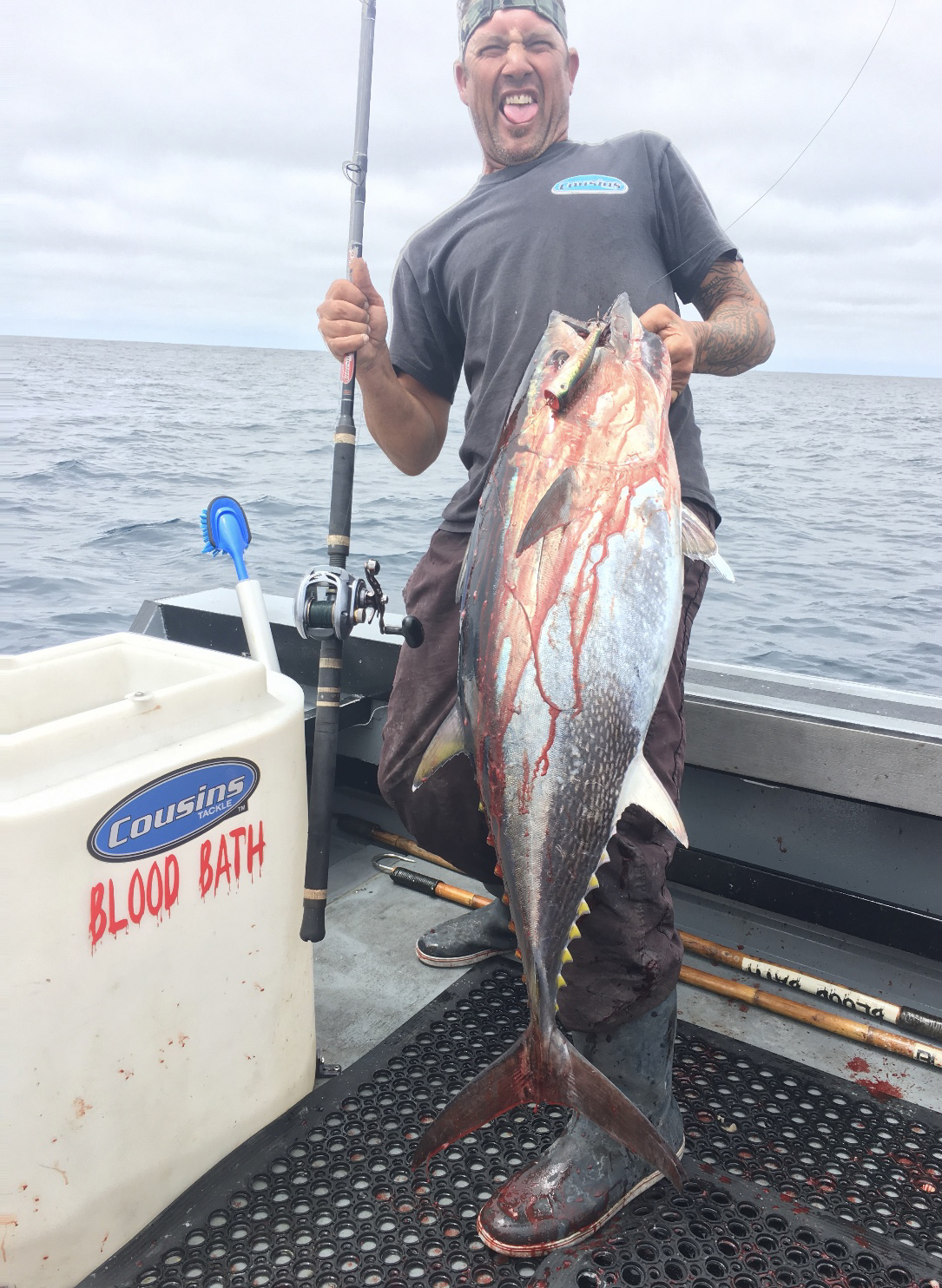 My buddy Jeff Cox and I were blessed to run into a couple of these situations last year. We fish out of San Diego area and the water temperature had skyrocketed immensely, into the high 70’s, nearing 80 degrees! You just never know what you’re going to see out there when the water is as warm as it was. The temperature was perfect for all pelagic species, even for Wahoo as we saw them move in as close as the Coronado Islands a couple years ago. The fishing has been fantastic the last few summers. One day, we’re chasing football size schools of foaming bluefin and yellowfin. The next day, we’ve found a paddy holding impressive schools of Dorado and yellowtail. To steal from Forrest Gump, the ocean is like a box of chocolate-you never know what you will get.

One day last year after having ran 40 miles due west in search of large bluefin that wanted to eat the yummy, we ran into a large volume of quality sized yellowfin. Just before we did though, we stumbled upon a paddy that was holding fish, and both started off the day with couple of quality yellowtail. That was not our intended fish but were happy to get them. We stayed on the yellowfin all day and picked a fish off on the popper, essentially each pod of foaming fish that we strategically stopped on. However, even with the volume of fish around, the many boats on the water would often stop right on top of the fish, sending them down much quicker then they came up. Instead of allowing these “foamers” to develop, the boat pressure placed on these fish sends them down almost instantly if the the boat is stopped right on top of them. As the majority of the boats went home, we continued to pick away. Until finally, the school of all schools came together and encircled us, creating an absolutely deafening sound, drowning out the sounds of the motor. It was chaos yet peaceful at the same time, until Jeff and I both fired out a popper, and instantly were both hooked up. These weren’t your typical school sized yellowfin either. They were 25 pounds to 60 pounds, with some that we saw down below the rest of the school that really made you wonder.
You just never know. We left the docks with our sights set on landing a trophy bluefin and ended up catching a handful of high- quality yellowtail and limits of some of the bigger yellowfin I’ve seen in a while. You really just never know in the summer when the water temperature is where it needs to be until you go out there.