I love the Eastern Sierra. Some of the nicest scenery on the planet fills your senses just driving up the 395 highway. There are countless lakes in the Sierra to fish. The choices are narrowed down considerably when I think about lakes that have big hungry trout and easy access for fishing. Having fished the Sierra for many years and I have found that certain lakes are a par above the rest when it comes to giving me the opportunity to just drive up to a lake, unload my gear and attempt to catch the big one. Lake Mary in the Mammoth Lake basin is one of my favorites. Almost the entire lake is shore accessible. There’s lots of elbow room at this lake and if your legs aren’t up to the task of walking then consider they have a first class marina with every type of floating vessel for you to rent, ranging from kayaks, pedal boats, pontoon boats and regular aluminum v-hull boats.
The Lake Mary Marina is owned and operated for the last 30 years by Don Barrett and family. When it comes to the local history of Mammoth you won’t find many people with more knowledge than Don. He is a resource of information on the past and present when it comes to the Mammoth basin. The Barrett family has previously owned property surrounding Lake Mary and some of Lake George since 1956. They were the former owners of Pokenobe Marina on Lake Mary in 1957 and have since sold the property over the years. The City of Mammoth has graciously stocked the lakes in the Mammoth Basin with in excess of 10,000 pounds of Desert Springs Fish Hatchery trout from Oregon. Add to that, the California Fish and Wildlife stockings and it’s got a healthy trout population. The Lake Mary current rainbow trout record is 28.12 lbs ! The brown trout lake record is well over 20 lbs. Yeah, it’s got the big boys alright, but here is where this story goes a little on the unbelievable side. Don and several other folks swear they have hooked and lost a brown trout they all believe to be in the 40 lb. range!! This monster brown has been hooked and lost by several locals who have seen the beast up close only to have either lost it due to too small a net and from what Don tells me is that the fish has a habit of straightening out 4.0 hooks. He is currently named “Freddy Mo Ready” by locals.

It’s a mythical fish that only a few have encountered and no photos have been shown to bear witness to its size. Maybe they should rename him the Locke Mary Beastie. But if Don says he’s out there then I’m a believer. There is also a population of brook trout and there are a few cutthroats along with some Dolly Vardens that have previously been planted years ago according to Don.
Lake Mary is a natural lake fed by 5 creeks and natural springs. The lake water level usually isn’t affected too greatly by the draught conditions that have plagued the Sierra in dry weather years. This is true for several other lakes in the Mammoth Lake basin such as Lake George, Lower Twin and Lake Mamie. According to my local resource Don Barrett, the depth of Lake Mary is approximately 114 feet at its deepest point and has a surface area of 143 acres. Water temperatures can range in early spring at 38 degrees F. to the 50 + degrees F. during the hottest months. Since the area has a stable year round water supply the lake gets lots of trout plantings to keep anglers happy. I asked Don how did the Mammoth Basin get started in the trout fishing business and got a history lesson to which I found quite entertaining. The original stockings came from shipping trout out from the Rockies to the Owens River. Then, eventually to the local lakes from the Owens River. This was a huge undertaking for the folks back in the early 1900’s so there were signs along the Owens River stating you would be “HUNG IF CAUGHT FISHING”. I cannot attest to this since I wasn’t around back then but seems like something the locals might had taken a little on the serious side, just like horse thefts. 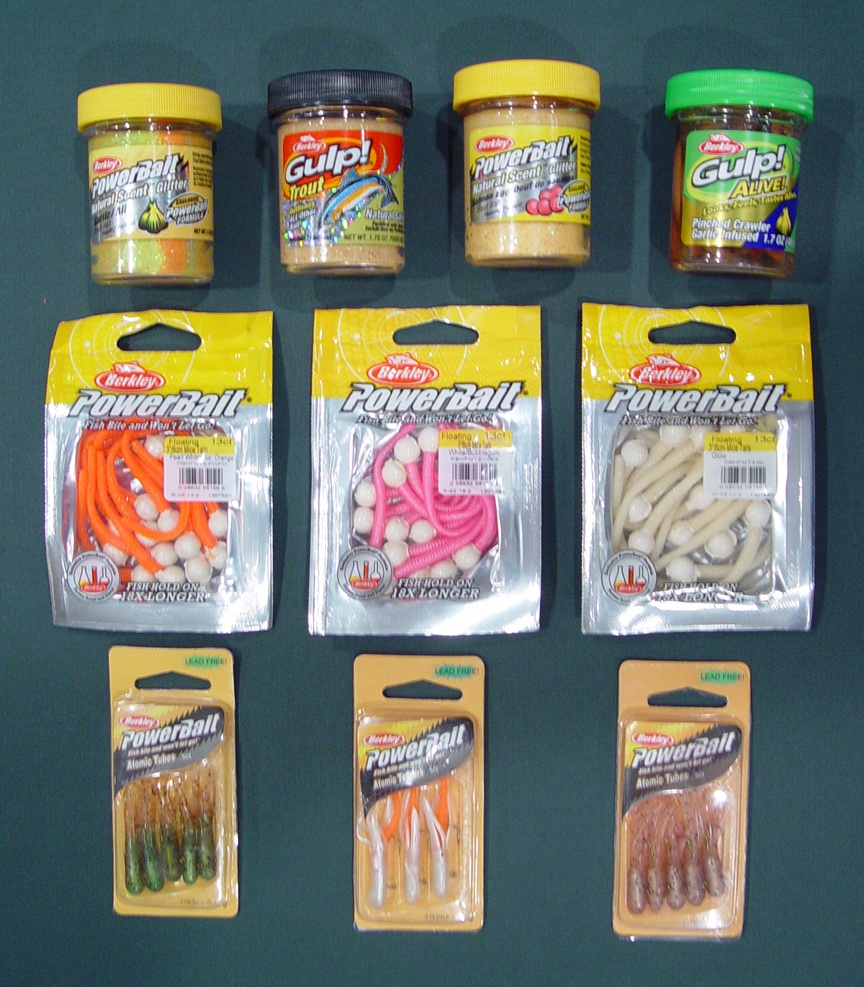 One of the top lures that consistently produces trophy trout in the Sierra is the mini tube jig. Marlon Meade Berkley pro team member recommends using the Berkley Atomic Teasers at these lakes. His top choices for colors are the Pearl White and the Cricket clear brown. It just plain works and changing up the colors keeps the action nonstop. For me, I like to use the Berkley Mice Tails with the smallest of split shots wrapped 2-3 feet from the Mice Tail on a # 8 or smaller Owner fly hook, so it drifts down slowly and moves with the current. The more popular colors to use are Pearl White head with Fluro Orange worm tail, Pearl White head with Bubblegum Pink tail and Glow White head and tail. Berkley Mice Tails have just been so darn successful for catching fish up there and is now my “go to” lure of choice. They can be rigged any number of ways by using a Carolina rig, split shot, or drop shot. Depending on the weather conditions will dictate what method to use.
Don Barrett likes to use a clear water bubble setup with mice tails or Berkley Power Trout Worm at Lake Mary. He recommends a 4-5 foot leader from the bubble. Adding water to the bubble will allow you to fish at different depths. Some of the more successful dough bait colors for Power Baits have been Rainbow Glitter, Salmon Peach, Garlic and Gulp Chunky Cheese. Another good choice is the Natural 2” Pinch Crawlers (Garlic). Using 2-4 pound fluorocarbon leaders will help to increase catch ratios on days when the bite gets a little on the finicky side of fishing. During the warmer months of the year, the fish tend to go to deeper waters so locating fish might may require knowing where the drop-offs are. Using a fish finder from a boat should help to locate schools of trout. Trolling the deeper areas of Lake Mary has produced some nice stringers of fish. Several key areas that have produced trout over the years has been the cove at Pokonobe Lodge and the shallow grassy areas on the north side of the marina where trout tend to hide in the early season.
Another good producing spot on Lake Mary has been the inlet streams on the south side of the marina. These creek inlets have been a local hot spot for brook trout to gather. According to Don, the lake record on brook trout is 4.75 pounds.
There are several other lakes in the Mammoth Basin that have good access to shore fishing and have produced nice stringers of fish for me along with a couple of brood stock rainbows. I also like fishing Lake George which is only a short drive from Lake Mary. This lake is several hundred feet in depth according to Don and I can attest that it also has some big brood stock rainbows having caught several over the years.
Marlon Meade amazes me every time we go there and has pulled some really nice 5+ lb. trout out of that lake. On a couple of visits the local bears chased him around the lake when they see him pull a big one out. It’s actually funny to watch from the safer side of the lake and yelling over the two way radio “Marlon, bear at 3 o’clock get moving!” If you decide to try your luck at Lake George be prepared to do some walking. The trail along the right side of the marina is a very popular place to wet your line. This trail can be a little on the rough side so come prepared with a good set of hiking boots and maybe a small daypack for fishing supplies, drinks and snacks. The trail leads to one of Marlon’s favorite spots to fish. The big rock cliff area is known for where the big boys like to cruise. This particular area has been known to have lots of trout. On the left side of the big rock there are some private cabins with boat docks. This general area holds a lot of quality fish that we have caught. Another good place to find trophy size rainbows is the outlet creek to the left side of the marina. A bridge crosses the creek and following the shoreline will be several areas to where lots of trophy trout have been landed. If you decide walking is not in your agenda, you can rent a boat from the Lake George Marina Landing. The same baits that work well at Lake Mary can be used at Lake George.
For those who are partial to float tubing and fly fishing may find the Lower Twins and Lake Mamie more to their liking. A popular float tube fishing area is the waterfall on the Twins. These are shallow lakes and according to Don Barrett and they have a depth of 25 feet.
The Mammoth Lakes Basin has been a great destination whether you’re fishing, camping, hiking, horseback riding, mountain biking, winter skiing and in general just relaxing the day away. There are many events the City of Mammoth supports throughout the year. One popular event is the Mammoth Kid’s Fishing Festival held on the last Saturday of the month in July. This free event has been going on for 31 years strong. The Kids Fishing Festival last year entertained 1000 children and also educated them in the sport of fishing. This festival is promoting the continuation of future anglers and hopefully for years to come.
For those of you that have decided to visit the Mammoth Lake Basin consider dropping by Lake Mary Marina. The staff at the Marina are very knowledgeable. If you’re lucky enough to see Don Barrett go ahead and fire a question or two but be prepared to spend some time listening and learning.