Just For the Halibut, By Shawn Arnold 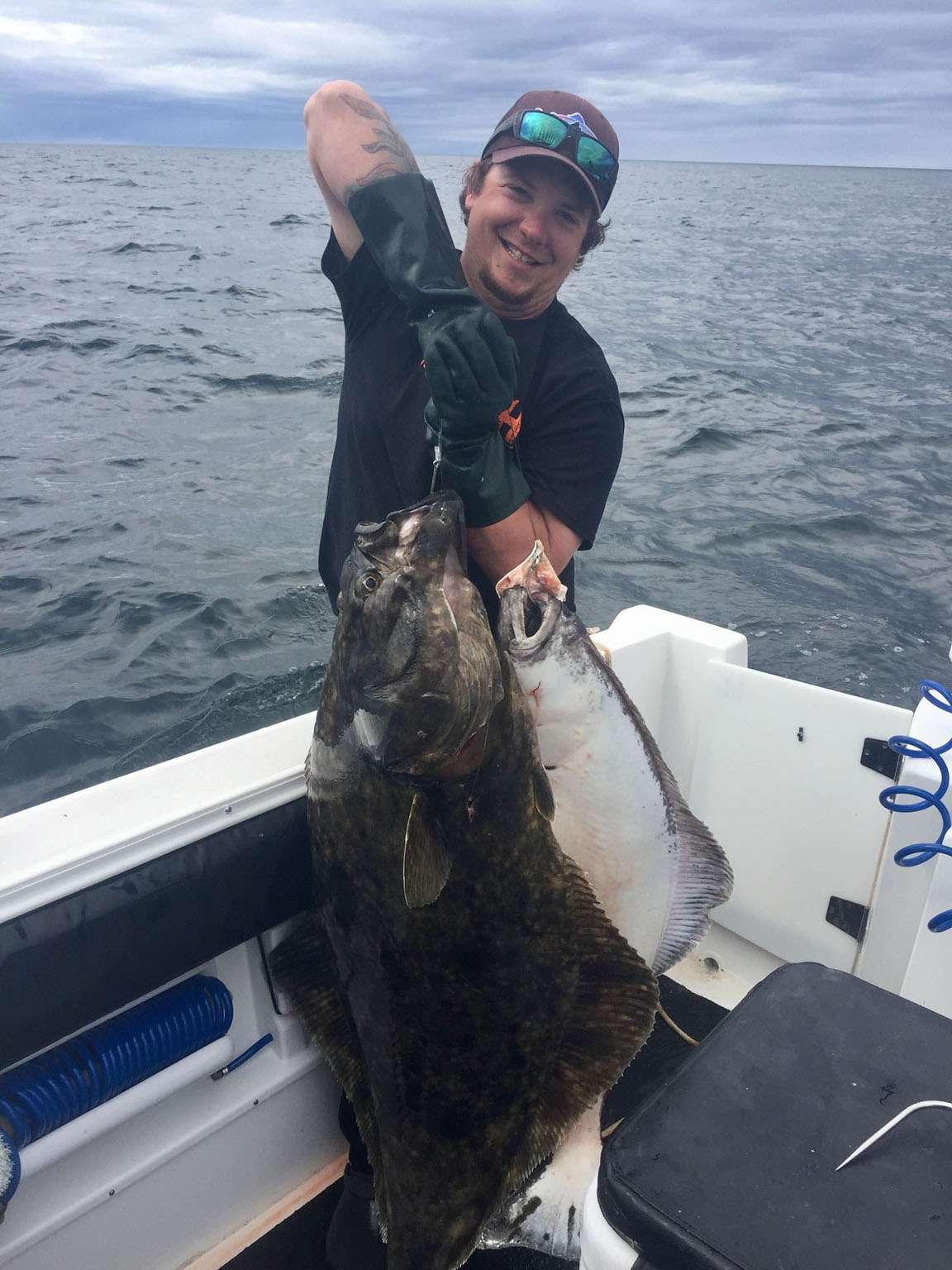 Some people go to Alaska and catch a 100 plus pound halibut on their first trip out. Some people go to Alaska and don’t know a rod from a reel and catch a 100 pound plus halibut. Some people who think they know how to fish and have over 40 days on the water in Alaska have NEVER caught a 100 pound plus halibut. That last person would be me. Or used to be me. My previous best was about 90 pounds which is a nice fish. And I have caught more 40 to 60- pound halibut than I can count. Still that elusive 100 -pound fish had alluded me.
My last visit with Big Blue Charters this past June produced my first 100 plus pound halibut. It was 67 inches long and the guide book says it should be 145 pounds. I was told that it was anywhere between 130 and 160. I am going with 145. That works for me. 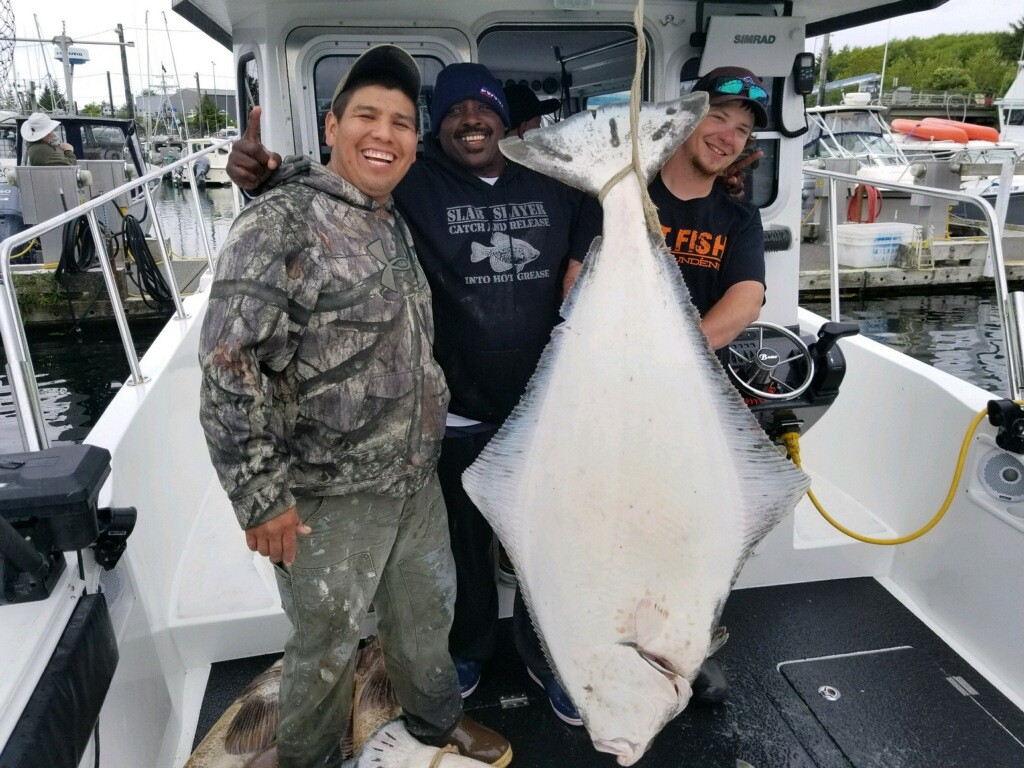 Big Blue Charters have caught numerous halibut well over 300 pounds over the years and my halibut made Captain Mike Keating shrug his shoulders like no big deal but that fish was one for the books for me. It was caught on an Avet reel and a Whopper Stopper built rod. One of the benefits of fishing with Big Blue Charters is that you know you will be using quality equipment and you don’t have to lug your own stuff on the plane. That way hopefully your luggage going home will be boxes of flash frozen filets from the tasty fish that inhabit the waters of Sitka. 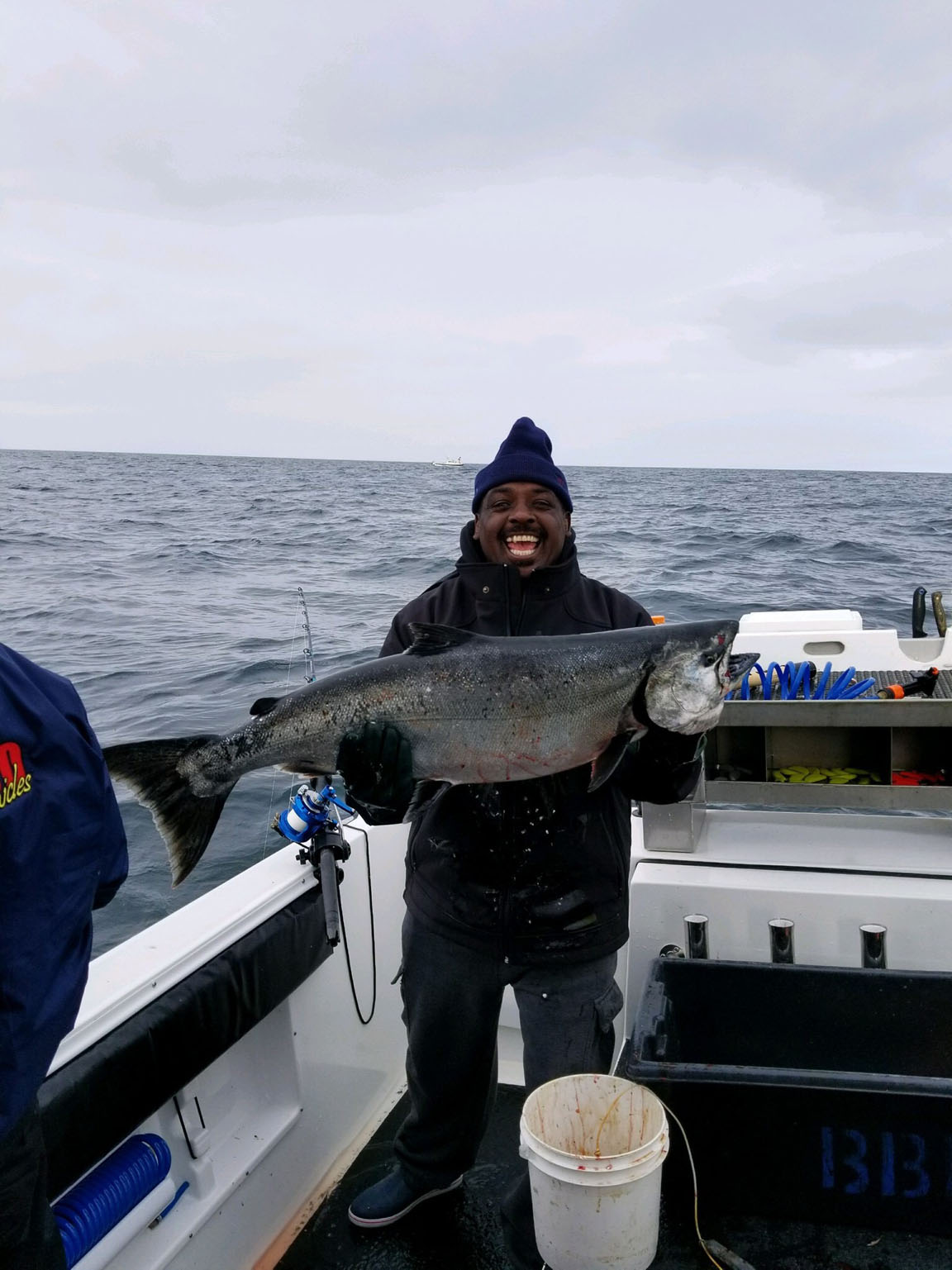 Another advantage of fishing with Big Blue Charters are their very comfy BAMF boats that have an inside cabin that seat 7 or 8 on the way to the fishing grounds. Also, this year they upgraded their sonar with some of the most up to date products available from Simrad. Mike Keating was like a kid in a candy store playing with it and marking spots. He was really excited about mastering it this summer and knowing to the “T” where all his good fishing spots are.
One of the great misconceptions I have found over the years about catching big halibut from people that have never caught a big halibut is that they don’t fight. That it is comparable to bringing up a door or cement filled boot. Nothing could be further from the truth. The one I caught peeled line as soon as he was hooked. Then about ½ way up he decided he did not want to come up quite yet so made a beeline to the bottom where our battle had started. So after 5 minutes of bringing him up and about a one- minute run back down I started all over again. He made one more short run all the while shaking his head violently trying to shake free. After 20 minutes or so I was able to get him to the surface where Captains Keating and Graham then did the dirty work and subdued him.
While that was a great fight, I think I even had a better one. This was one of the most unique catches that I had ever encountered. When I caught my first halibut it was with a big circle hook and about a fistful of bait. That rig was made for halibut. A little bit later I dropped down a herring using a salmon rod. The herring was rigged with two hooks. One hook through the nose/mouth area and one through the dorsal fin. I was fishing the bottom hoping for a lingcod or yelloweye when I hooked a fish. Right at that time Ed Robison had a big halibut on and he was tangled with Raymond McCullough. I tried getting out of the way by going on the other side of the boat and to get my rod around the motor I put the reel in free spool with my thumb on it. As I got to the other side of the boat and put the drag back on my fish felt much heavier. In fact, I claimed that this one was bigger than the 145 pounder. I was struggling with this one, especially on the salmon rod. It was bent in half and my line was being taken again and the rod was bent in half. After about 25 minutes I got color and Mike said sarcastically “All that work for that thing?” It was about a 70- pound halibut. The funny thing is the 70- pound fish was covering the 45 -pound halibut that was on the other hook. Our guess is while I put it in free spool and walked around the boat, one of the halibut bit the other hook. So, two nice halibut on one 6” herring with two hooks in it. Captain Graham said he has never seen that before and neither had I. 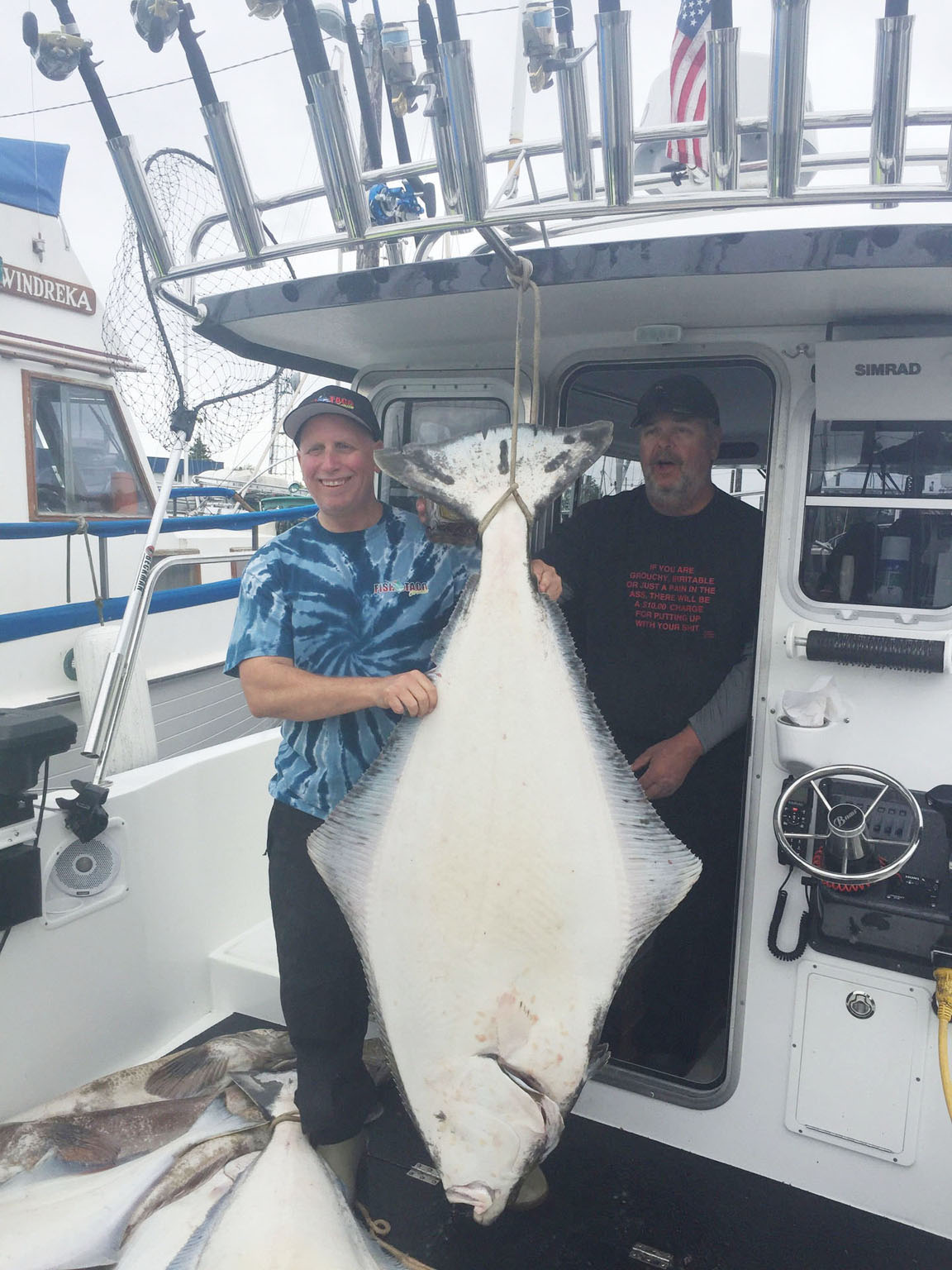 Even if I had not caught the personal best halibut that day it still would have been one of my best fishing days ever. Part of fishing is having fun and fishing with Captains Jesse Graham and Mike Keating of Big Blue Charters, Ed Robison of Whopper Stoppers, Raymond McCullough and Vinny Peters an ex-deckhand for Big Blue Charters is fun. The days we were fishing were non- charter days so we just had a bunch of guys having fun. In fact, the only person who could have made it more fun was Big Blue Charters deckhand Emmitt Andersen. This outstanding young man had to miss the fishing though as he is part of the Sitka High School baseball team playing in the state finals that week that made a Hoosiers (reference 1980’s film about Indiana basketball) like run in winning the Alaska state baseball championship over a much larger and highly touted Anchorage high school. Congrats Emmitt.

Ed of Whopper Stoppers builds some of the finest rods available and his booth is always jam-packed at the Fred Hall show. Ed is a good guy and a good guy to fish with. Since this was a trip of friends there was lots of ribbing going on. LOTS. Any mistake was magnified. Ed took it all in like it was no big deal.
Raymond is a trip. I would like to thank him for taking the target off my back. It is usually me who takes the brunt of the ribbing on this Alaska trip but Raymond changed that dynamic. It would be hard to find a more energetic, fun and quirky guy. He farmed a few salmon the first day and took quite a bit of ribbing but just smiled through it all. Who ever had just caught a fish, Raymond would go out his way to high 5 them. The next day before we went out fishing Mike and I stopped at a grocery store and bought some strawberries and gave them to Raymond and asked if he grew them on his farm. He just laughed. Raymond ended up with the last laugh though as he pulled in the largest salmon of the trip that day. 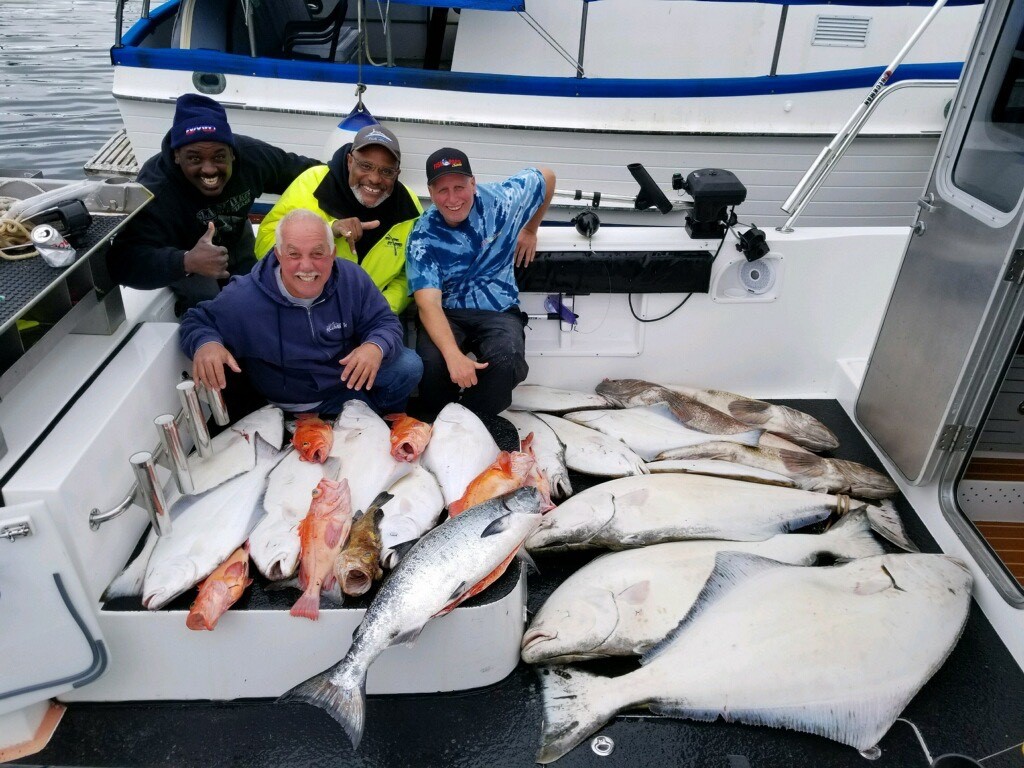 The three days of fishing produced numerous halibut in the 30 to 70 range, some large lingcod that we had to release and some we kept that fit the slot limit and limits of yelloweye and black bass each day. And while the salmon fishing was a little slower than normal (plus we farmed a few) we spent more time targeting bottom fish than normal. Captain Keating is one of the best and most determined captains I know and as always put us on the fish. Fishing with Big Blue Charters is always a highlight for me and I am already looking forward to next year. Hopefully when I go no one will give me a basket of strawberries.
For more information about Big Blue Charters or to find out what dates are available for next year contact them at 907-747-5161 or check out their website at www.bigbluecharters.com.