Girl Power on the Thunderbird By Rose O’Brien

Fishing is my passion, and being a woman makes it even more special. When I first started, I was nervous about being on a boat full of men, but not anymore. I have grown use to it. The men quickly learn that I am a serious fisher lady. The ones who know me don’t doubt me, but it is fun to show them I actually know how to fish.
Rick Redmon and Mike Oreb planned an overnight fishing trip on the Thunderbird with some of the KC Anglers and Team 57 fishing clubs. We all met at the landing and waited for our trip to begin. As usual, some of the guys couldn’t wait to fish, so they fished at the landing while we waited. They caught some small bass. Our chariot arrived and our adventure began. 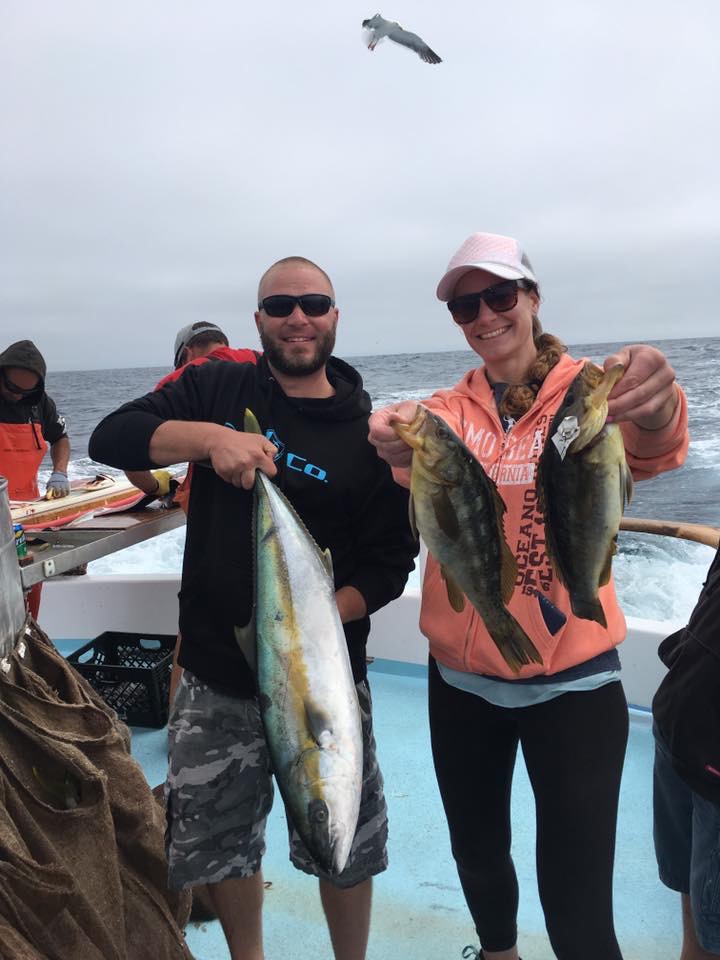 That night, most of us got our gear ready for the morning while the boat got bait and began it’s journey to San Clemente. Ricardo Zepeda always helps me to set my drag and get my tackle together, so in the morning I don’t have to worry about it. Captain Andrew Viola was the night driver and drove us to the island safely.
When we reached Clemente, I woke up not ready to fish, so I poured myself a cup of coffee and began to walk around the boat talking to the other anglers while they fished. No one was catching anything. I was chatting with Alex Tarpinian and drinking coffee when suddenly, the yellowtail started to bite. I looked at Alex and said, “It’s on. Let’s fish!” I grabbed my dropper loop setup and dropped my line in the water and as soon as it hit the bottom I was on. A yellowtail took me from the stern to the bow, and that’s where Captain Jeff Markland gaffed it. It was a beautiful 32lb. yellowtail. Several other anglers caught yellows while I was catching mine. The morning was off to a good start. 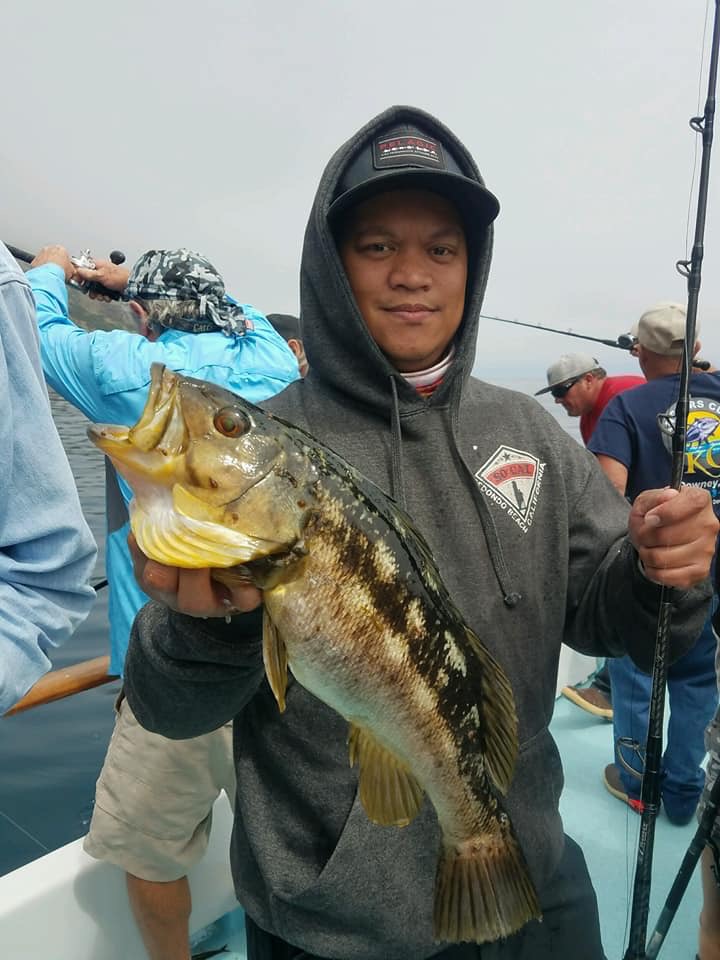 Oscar Ochoa was the hot stick on this trip. Every time I turned around, he was on a fish. He caught about 7 yellowtail and a variety of other fish. He could do no wrong. Joseph Wilson caught 3 yellows, and Brian Kelly, one of the deckhands, passed a yellowtail he hooked to Sydney Deturk. Watching her face while the fish was fighting was an awesome sight. Unfortunately, the fish won, but that happens. On her own, she managed to get a few bass. Another lady angler, hooked up to a yellowtail and it took her all the way around the boat. We all cheered her on as she reeled it in. All 3 ladies had a fish under their belt. Girl Power. 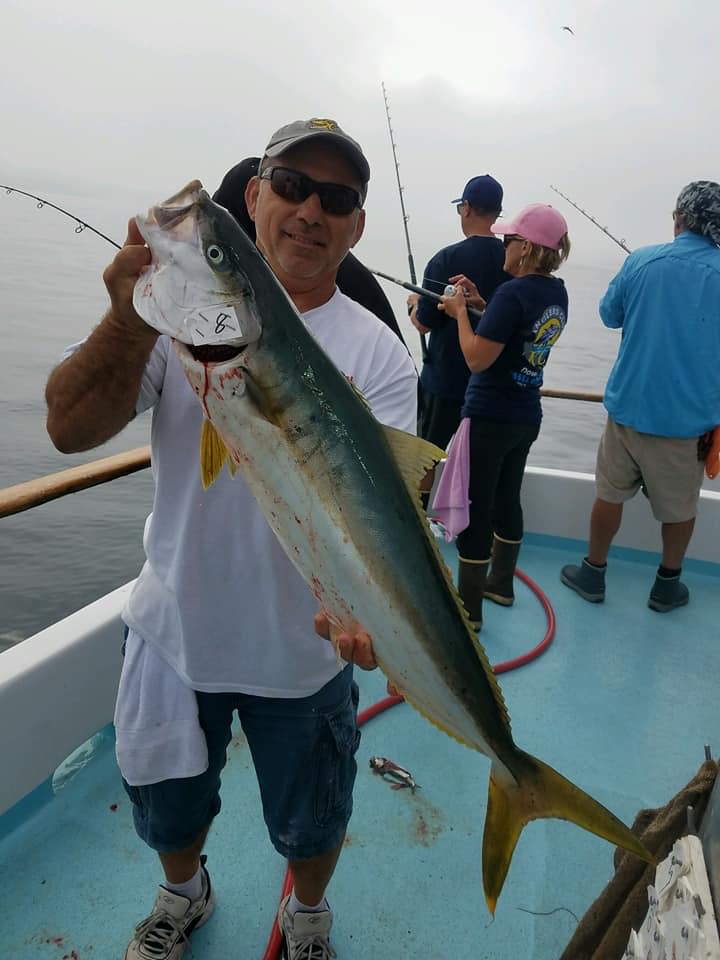 Our bait choices were either sardine or squid. I hate picking up squid. Their tentacles give me the creeps. Ricardo always laughs at me as I attempt to grab one and drop it when it tries to grab me. Sometimes I get it on the hook and other times he hooks it on for me. I guess that’s one of the perks of being a female. Putting on a sardine is as easy as pie. It’s those crazy squid that get me. 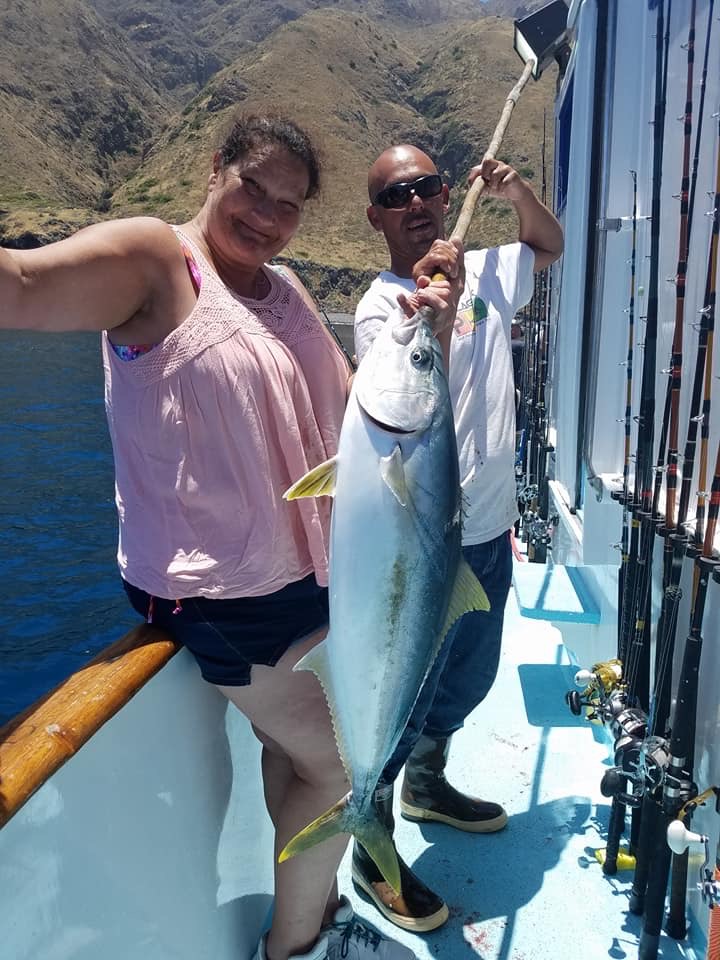 We drove around San Clemente looking for fish and we stopped several times. One time, we found some bass. George Schewardz hooked up to a beautiful calico that gave him quite a fight. It was definitely a keeper. I caught a couple bass on a Hookup Bait, but none were as big as George’s.
At one stop, Roger Zarate caught a nice yellowtail. I thought I had competition for jackpot since his was so big, but mine ended up being bigger. All of the KC Anglers and Team 57 caught a yellowtail. The boat total was 42 yellows with a decent calico bite, plus other random fish caught. 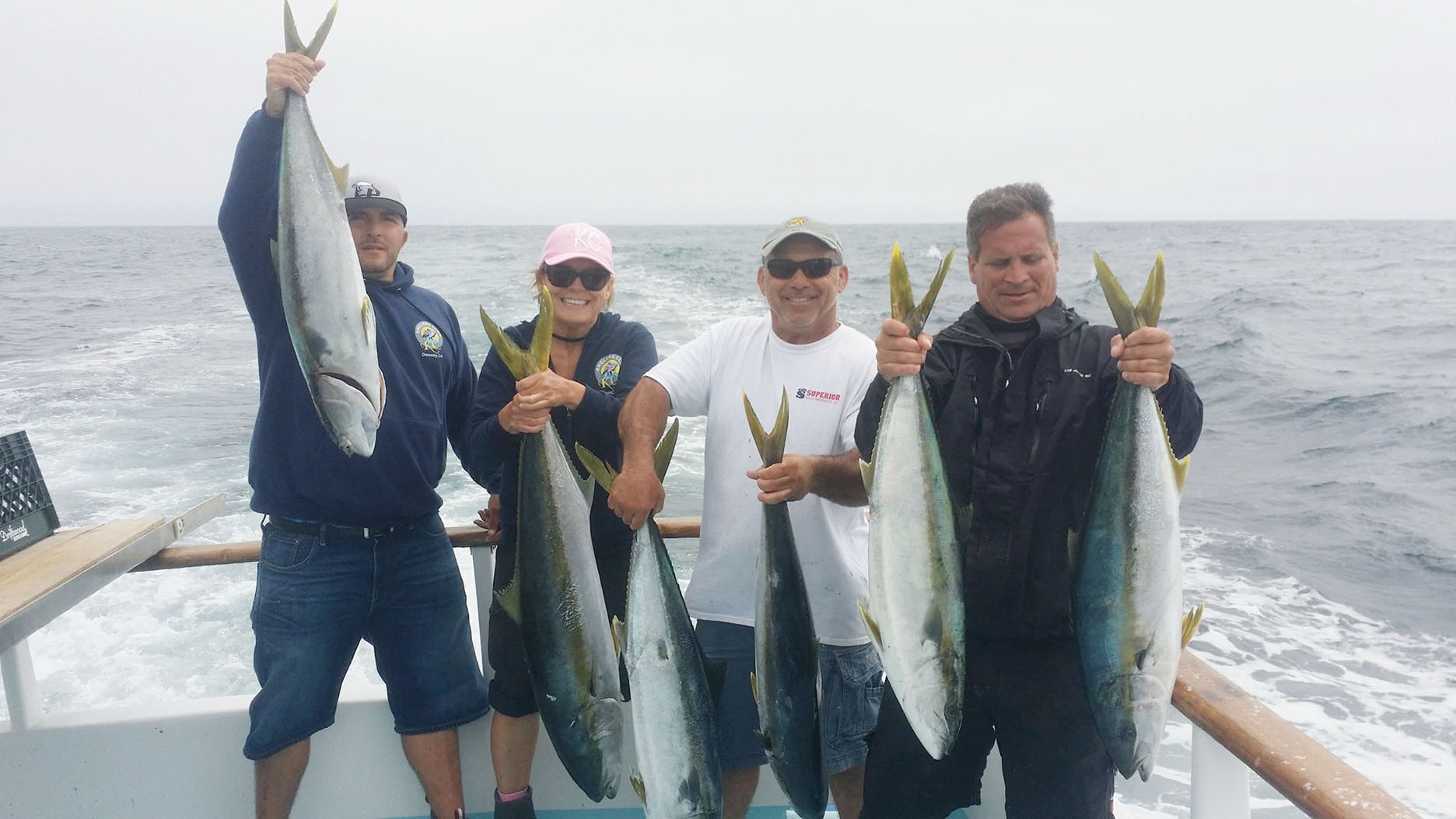 The trip was a success and everyone was happy with their catch. The crew always gives 100% and helps other anglers when they need it. I am pleased to say I won jackpot with my 32lb. yellowtail caught on a Moon’s custom rod 7.5 ft. Super Seeker with an Accurate Boss Xtreme 400 loaded with 65lb. spectra and 40lb. mono. Having a passion for a male dominated sport has never deterred me when it comes to fishing. I think other ladies should try it out. They might find that they love it as much as I do, and I would be willing to help them out anyway I can. Tails up!