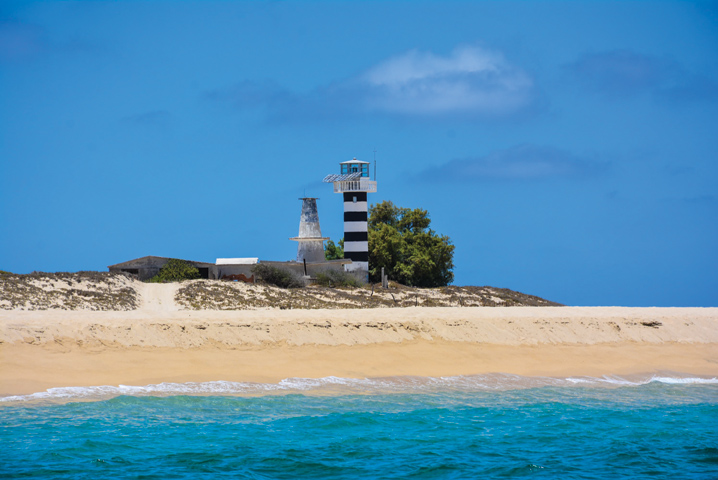 Upon arrival in Cabo, our flight was the only one outside of Terminal 2, with the exception of a small commuter jet sitting on the tarmac of Terminal 1, for local flights within Mexico. There was no long line at immigration and all luggage arrived in a timely manner. It was then off to the final declaration of goods brought into Mexico before final clearance to our awaiting shuttle. 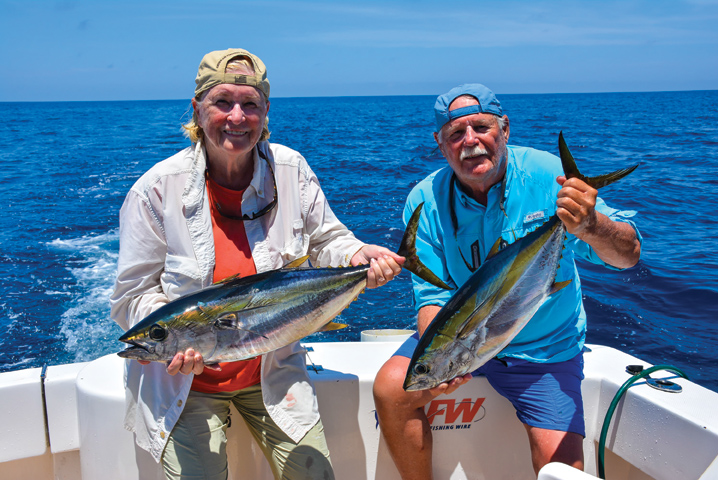 The seas were clam and talk around the bar at the pool was of the good fishing currently taking place. We sat down and chatted with Axel who assured us that fishing is very good and that our cruiser would be awaiting us at 6:30 in morning. Arrangements for lunch and cold drinks were made and a check on our Mexican fishing license finalized arrangements for the following days fishing. 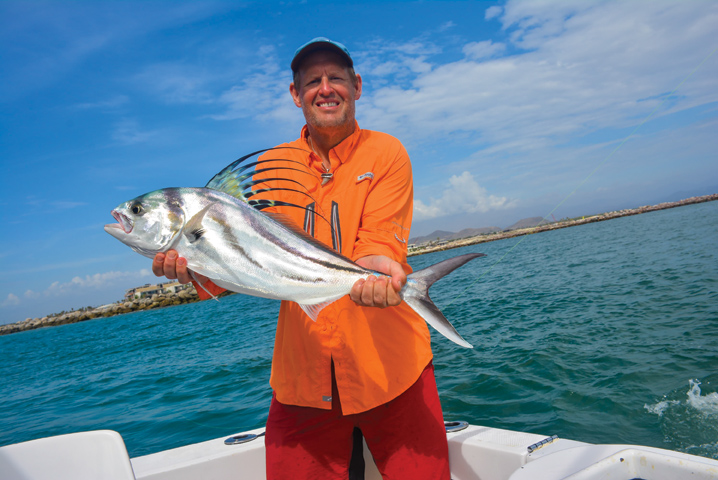 The veranda offered up an excellent venue to enjoy a warm Mexican evening on the Sea of Cortez and a cold Pacifico made for a good choice while waiting the chef’s specialties of ceviche, home-made tortilla soup and grilled pargo off the dinner menu.
There were no sardines available for live bait, but one of the local pangas had some scad available allowing us bigger baits for billfish. The fast Eclipse91 headed out to the tuna grounds but the captain could not locate a school of porpoise, so we opted to put out a spread of Zuker jigs and couple of small tuna feathers in search of marlin or Dorado. 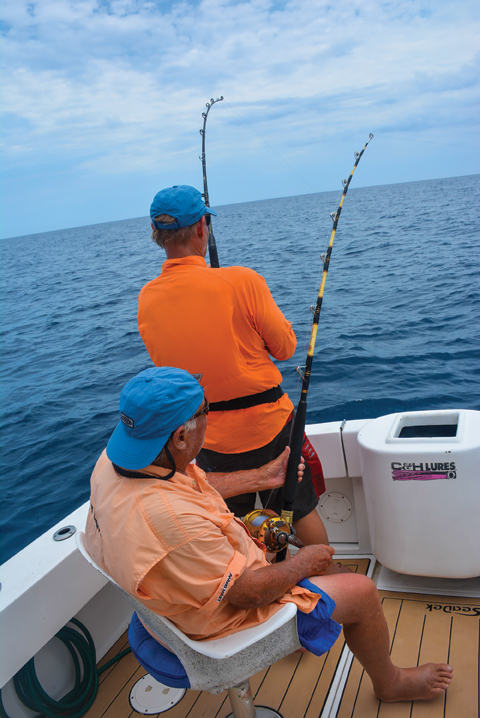 It was mid-morning and we had only a couple of billfish strikes, that were so soft that lines were not snapped out of the outriggers. It was like the billfish were just not hungry, although this fishery showed of birds, flying fish and dead calm seas.
About noon a marlin came up behind one of the Zuker lures and my son Dr. Brook Niemiec DVM of San Diego dropped back one of the scads as an offering. That marlin took the live bait and came out of the water throwing its head from side to side. It was a good-sized blue marlin, weighing over 300 lbs. that took nearly an hour to bring to leader and release. Later on, the deckhand spotted a small pod of porpoise and we finished the day by adding 10 school sized tuna to the catch.
It was hot on the sandy beach, which mandated flip-flops to walk from the calm shoreline up to the shade of the resort pool. It was fresh sushi and grilled yellowfin tuna for dinner that night along with a cold bottle of Chardonnay. 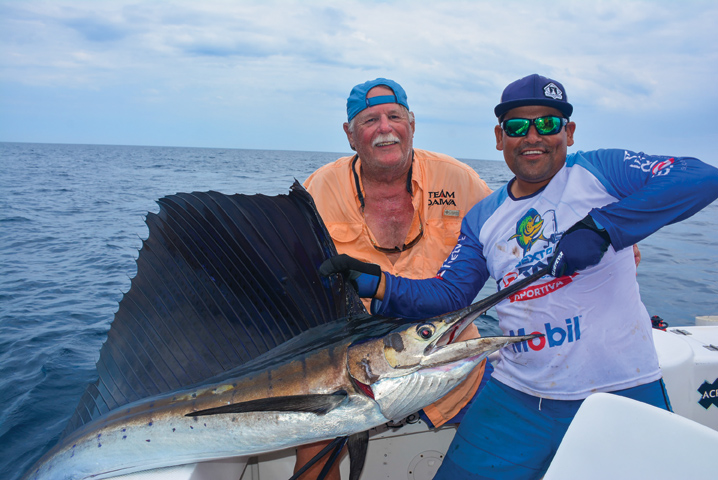 Day two started off with a run out to the tuna grounds again, and we found them just about 3 miles off the beach…a huge school of porpoise. Rigged up with small 125 mm Sevenstrand jet heads and hoochie rubber jigs, tuna jumped all over them. Another boat hooked into a marlin while running through the porpoise and this angler hooked into a striped marlin that ate a tiny hoochie jig, only to have in come unbuttoned after 10 minutes. Our choice for light tackle tuna fishing was a matched set of Daiwa Saltiga rods and high-end Saltiga LD30SH reels, spooled with Daiwa J-Braidx8 line. With the fish locker, loaded with ice, now filled with tuna we headed off in quest of more marlin or hopefully a sailfish.
It wasn’t much past 9 AM when a marlin’s dorsal fin appeared behind one of the lures. The sport fisher slowed a little and the foaming sea of prop wash all of sudden showed the presence of 4 billfish, of which at least two were blue marlin. While the blues sounded out, both outrigger Zuker lures were bit and my son and I were hooked up into a billfish double. The fishing ended with my wife Toni bringing another striped marlin to leader for a quick release and then it was back to the beach with colorful fish flags flying high up in the outriggers.
To expect fishing be good a second day in a row was being very optimistic, but the tuna where still in the same area and bit good. After 10 more tuna were added to the onboard fish locker, it was then time to run north in hopes of another blue marlin hookup.
With flat calm water, with literally thousands of Pectoral birds winging over the Sea of Cortez and flying fish everywhere, fishing conditions couldn’t have been any better. 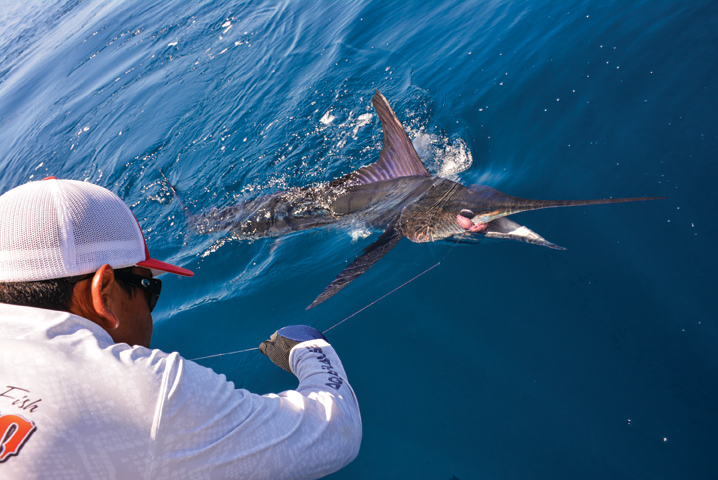 All of a sudden there was an explosion on the short line lure, as a huge blue marlin cleared its entire body out of the water with an orange marlin lure hanging out its huge mouth. The sight of the leaping massive blue was just like the TV commercial for Tropic Star Lodge off Panama of their black marlin being fought.
The tackle was right and the fighting chair was set in the cockpit perfectly to allow this angler and the captain to stay tight with that huge blue. During the battle, which lasted nearly 1.5 hours, that beautiful marlin made many acrobatic jumps and tail-walked across the calm sea.
After being dredged up from spending most of the fight down deep the expended blue came back up to the surface with the deckhand ready to grab the 300-lb. test leader. All was right to simply wait for the swivel to come within hand-reach, when the marlin turned towards the boat, opened its huge mouth, winging its massive bill and threw that jig right back at the boat. Ironically, that marlin stayed up, probably kind of still in a state of shock, and could have been backed down on a few more feet and free gaffed, if that had been the choice rather than plans to release all marlin. It was estimated that blue weighed nothing less than 500-lbs. and they awarded this angler with a catch and release flag, as the fish was beaten and so close to being fully leadered.
That marlin was by far the largest fish this saltwater fishing editor has ever hooked, far surpassing a 350-lb. black marlin off Bazaruto Island in the Indian Ocean and a 300-lb. “cow” yellowfin tuna caught four years ago on the Outer Gordo Banks off Cabo San Lucas.
The last day allowed only for a few morning hours of fishing around the Punta Arena light-house for roosterfish along the beach. After blowing a large rooster that ate a scad, Brook hooked into his roosterfish, which weighed about 18 pounds and would be the last fish of this truly epic time of fishing the Sea of Cortez.
Come next summer the Niemiec family is looking ahead to booking another trip to Hotel Buena Vista Beach Resort, either to fish for more blue marlin, tuna, roosterfish or Dorado, or hopefully all species, the last week of July or early August.