When fishing the lakes and reservoirs throughout Califor 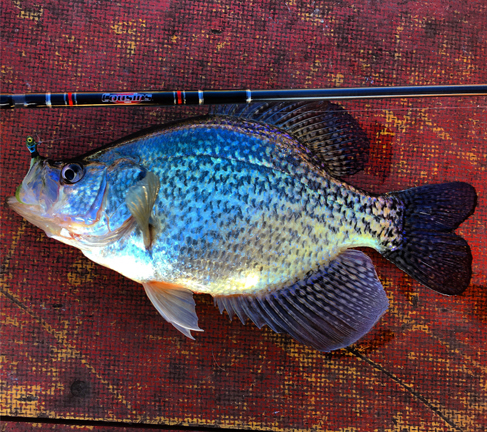 nia, from north to south, its safe to say that the most commonly targeted fish is the largemouth bass. This is true, even when many of these bodies of water hold record sized catfish that are seldom targeted, monster carp that are widely considered trash fish, and massive trout that are stocked throughout the state. As you make your way northward, the bass fishing begins to diversify and you begin to see stripers and smallies, followed by the spotted bass, the last of which just recently saw it’s world record broken yet again at Bullard’s Bar. Salmon and steelhead flood the rivers, accompanied by pre-historic looking sturgeon in the delta, the options are phenomenal and sometimes overwhelming, in the vast amount of choices. With all the above, the fish that is often forgotten is the black and white crappie.
The Crappie is a predator. They feed on prey just like bass do. Having said that, everything is relative and they can’t inhale a 10” bluegill or a 2lb trout like a largemouth can. They have been known however, to feed on the young of their predators, such as Pike and Walleye in the Mid-West and Northeast, but locally, they will gladly eat smaller bass and pan fish as well, specifically the fry of these fish. Predominantly, if there is a prevalent baitfish population in a respective lake, usually shad or minnows, that will be their main source of food. During the summer and winter months, crappie will often school in large groups and follow these schools of baitfish. 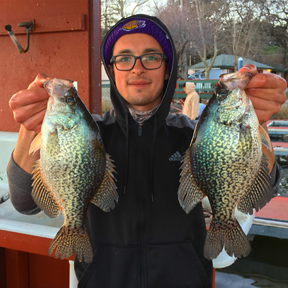 Additionally, like many other types of pan fish, crappie will also eat insects, insect larvae, plankton, and worms. This is typically the case in lakes and ponds where large baitfish populations are normally uncommon. While they follow the bait, where bait is present, many times the larger models will prefer to hang out around structure such as stick ups, brush piles, lay-downs, and ledges, positioning themselves for a quick and safe ambush attack. Depending on the time of the year and the water temperature, you can find them schooled up at different depths. When they are spawning, or moving into the shallows to spawn, they can be found in water as shallow as 1-3 feet deep. When the water is colder, typically under 45 degrees, they will hang out in water as deep as 30-50 feet deep. However, as the water gets too warm, upward of 70-75 degrees, they typically go back towards the deeper water, and will become somewhat sluggish post-spawn, to conserve their metabolic energy. 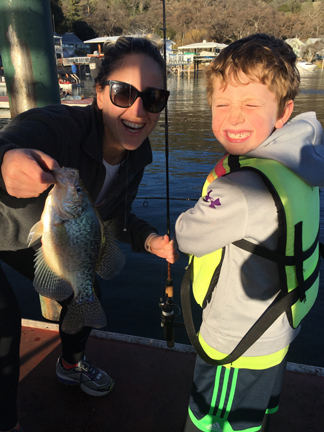 Anglers that are just getting started in targeting this fish, quickly realize that one of the largest problems is hooking crappie, followed by keeping them on the hook. They have been dubbed the infamous “paper-mouth” for a reason. They have an extremely soft and paper-thin mouth, and setting the hook too hard will often tear the membrane, followed by a quick exit of your hook from its mouth. Because you will typically be fishing an extremely light and finesse set up, you must be gentle in not only hooking the fish, but also fighting the fish, while still maintaining constant pressure. If you allow for any slack in your line during the fight, you are giving the crappie a high percentage chance of shaking the hook free and swimming off. This is why having the proper set up is extremely important in having the best chances of hooking and landing this delicious fish.
In terms of targeting these fish, there are tons of different ways to do so. Some of the more popular ways, in regards to artificial baits, range from micro jigs, grubs, spinners, small crank-baits, and small jerk-baits. On numerous occasions, while fishing for bass, the respective outing turned into a wide-open crappie bite on the bass gear. While they are primarily targeted with smaller sized bats, they will also commit to the larger baits as well. You can see that this is the case in the photo below. It shows a quality model I caught on a SPRO Aruku Shad 85, which would be considered a large lipless crank bait, with a weight and size of 1oz and 85 mm respectfully. While many, including myself, prefer to target crappie with artificial baits, they fish will gladly eat live bait, with crappie shiners being a particular favorite. 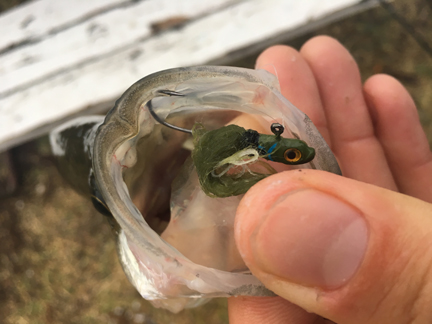 My go to bait for targeting crappie, and one of my favorite all around lures, often underestimated because of its size, are the SPRO Phat Flies, designed by Bill Siemantel. They are made in 1/16oz & 1/8oz, and come in 5 different colors, ranging from “baby bass” and “bluegill”, to several different variations of shad, as well as a bright chartreuse. They use a Gamakatsu hook and its world-class sharpness plays a large role in hooking and landing the fish. These baits are great for being able to “match the hatch” to some of the most prevalent bait fish in our California waters. The primary technique for which Bill designed these jigs, is the Float and Fly method. Because of their design and balance, they sit under the bobber horizontally, enhancing the level of presentation, but also increasing the hookup ratio. They can also be thrown like a “mini-jig”, which is typically what I do for panfish and trout. Having said that, the Float and Fly method can be quite effective for these fish as well, in addition to the trophy bass that it was designed for. With the mini jig method, it’s a short and constant twitch of the rod tip, and your tackle plays a huge factor in being able to execute it properly.
An ideal rod for these applications is one that is highly parabolic, meaning it has a slow action. It’s all about preference in terms of length, but I prefer something between 6’6” and 8”. However, longer rods will allow for a marginally farther cast, so a 9’-10’ rod can be a good fit for some as well. The rod I throw is the Cousins RSP 651. It’s a 6’6” composite blank, meaning it’s composed of both fiberglass and graphite, and it’s perfect for fishing applications such as the ones mentioned above. Paired with a 500-sized reel, the rod feels extremely light and well balanced. It’s competitive in pricing, and like all Cousins rods, made locally in Huntington Beach, CA.
In addition to rod and reel, the line size is also very important. In my opinion, the lighter the better, especially when fishing clear waters, but anything up to 6lb will work. The line diameter may affect the action of the jig, and if the fish are finicky, it will unnecessarily increase the line visibility, which can be the difference in getting bit. The line that I prefer to use is the P-Line Fluorocarbon in 2lb test. I feel more connected to the bait with the lighter line, and don’t feel it necessary to fish heavier line. Having said that, if your fishing around thick brush and stick-ups, having the 4lb or 6lb may allow for you to get the fish out if it gets hung up in structure. P-Line also just came out with a new line of Fluorocarbon called Tactical. It’s extremely strong and abrasion resistant, and comes in 6lb, which works great for the Crappie. Fluorocarbon is generally more abrasion resistant than monofilament, so even with the lighter test, you should feel confident in fishing for these panfish.
Lastly, Crappie is fantastic table fare. They’re arguably my favorite freshwater fish to eat, and are very simple to make. Once the technique is dialed, like with any fish, the filleting process is smooth and quick, and preparing them for consumption is even faster. I prefer to pan fry them using the following recipe. Take a large bowl, and empty a bottle or a can of beer into it. Add corn flour, salt, pepper, and creole seasoning. Take a separate bowl and fill it with sufficient flower. After washing the fillets, coat them thoroughly with flour, followed by the beer batter. Once you get the golden color you desire, you can drain the excess oil on a paper towel, and serve with lemon wedges and hot sauce! For those who enjoy a nice cold beer, it can accompany this meal very well.