Browns in the Green By: Shawn Arnold 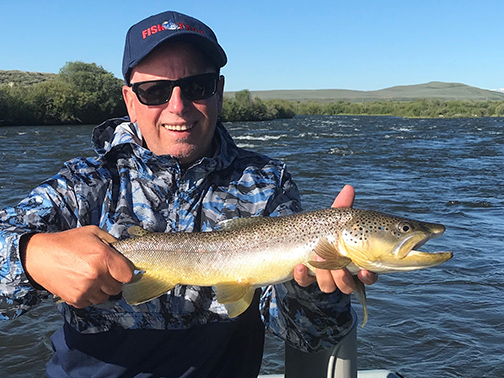 “Twitch it. TWITCH IT!! Damn it he swam away” yelled Brandon Keene my guide for the day who works for Grand Teton Flyfishing. We were fishing the Green River about 45 minutes outside of Jackson Hole, Wyoming and this was the second time in 45 minutes that a HUGE brown trout followed my lure to the boat. Since the lure was only a few feet from the boat, the only way to entice the trout would be to leave it there and twitch and hope the fish struck quickly. My thought when I saw the fish was ‘are there pike in this river?’ It was that long. Brandon first said that it was 26” long and within a minute it was up to 28 or 29”. According to a chart I read a 29” brown trout should weigh about 8 pounds. All I know was it was the second big brown trout to follow the Dynamic crankbait to the boat. Not that many did not bite. I caught and released many browns including one about 23”, a rainbow and a hybrid. Also I missed many others that hit but did not stick.
The reason I was fishing with Brandon is I wanted to find an outfit in Jackson Hole who was OK with my spin fishing and not fly fishing. Some of the companies turn their nose up at us spin fishers but not the case with Grand Teton Fly Fishing. Their website showed the option to spin fish and or fly fish and so I was ‘hooked’.
I booked a date and when the owner Scott Smith found out I wanted to spin fish he said I have the guy for you. On the morning we were to fish, Brandon picked me up at my hotel in Jackson Hole around 7 A.M. and on our hour drive to the Green River we were able to find out what a small world it is. In between him showing me animals like elk and deer off in the distance off the road I discovered he used to work for Crocodile Bay Resort in Costa Rica. I went to Crocodile Bay before it actually opened and did a story on it. He knew of Jeff Klassen who was the GM at the time and he knows Todd Staley who was in charge of the fishing there for many years. Todd is now in charge of a conservation group that provides guidelines for fishing in Costa Rica and he lives there still. I actually text Todd while Brandon was driving and said look who I am with.
He also worked the east cape, Mexico and in Patagonia, Argentina. He grew up near Jackson Hole and while he loved the excitement of these other exotic places 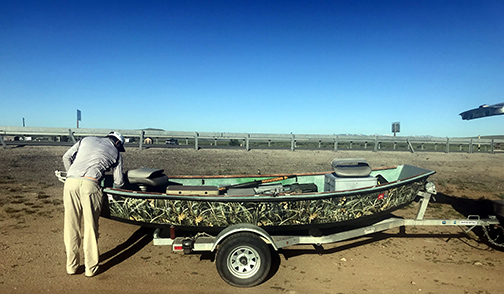 Jackson Hole is where family is and where he grew up. As he said the winters can be rough but no place he would rather be in the summer. That is saying something with all the places Brandon has worked.
When we got to our spot on the Green River, Brandon got the trailer with the drift boat ready and backed it into the water. We would travel 8 miles down the river that day. They have a cool system that enables them to start at point A and finish at point B as a company takes the truck and trailer to the ramp 8 miles away and parks it there so when you finish you just have to back up the trailer and load. There are no motors on these boats so they depend on the sturdy back of the guide and the flow of the river.
I brought a travel light weight 6’6” rod with me and a spinning reel spooled with 2# test. I was excited to see what I could do tossing mini-jigs at these big boys. Brandon looked at my set-up and kind of giggled. He was trying to be polite but in the fast waters of the river and all the possible things that could snag on it, my 2# test was far too little. He handed me a rod and reel with 8# test and said use this. I was thinking 8# test is way too much but the fast flowing water was murky and with all the bites I got on the lure it did not seem to matter much. And I am pretty sure if one of the before mentioned big browns had hit my mini-jig it was party over. River fish tend to be much stronger than lake fish. They spend their days working the tail against the flow of the river and like someone who is used to running a far distance everyday they are just in better shape and stronger. And for the record the travel rod did come in handy when I hiked and fished a few lakes in the Grand Tetons. 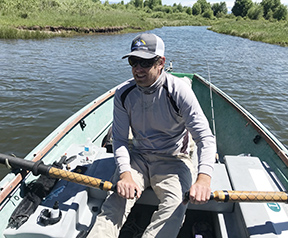 We went down the river for over 4 hours. I pretty much cast non stop that entire time. The only time I took a break was when Brandon made me a turkey sandwich. And using Covid safety measures he put on plastic gloves and made it for me in the boat. They also provided water and soda.
As we went down the river Brandon would survey the water and say cast under that tree, cast by that ripple, etc. etc. Like all the experienced guides at Grand Teton Flyfishing, he had been down this river numerous times and knew it like the back of his hand. There were a few times when he said that spot holds fish and I cast and caught a fish or got hit. The numerous times I got followed was quite an experience also. All in all it was a great day and worth every penny. I would definitely do it again.
I highly recommend Grand Teton Flyfishing. You can find out more about them at www.grandtetonflyfishing.com