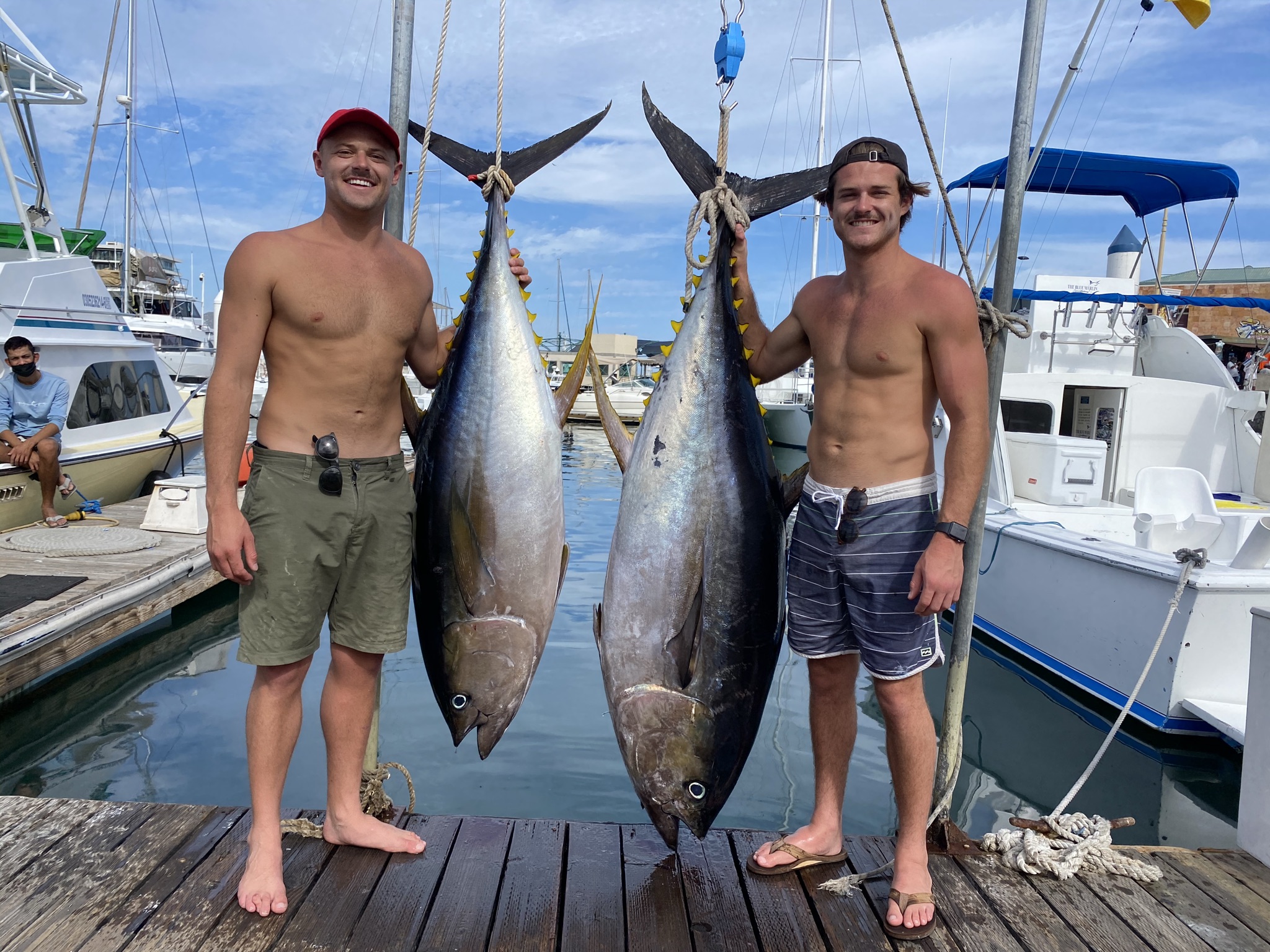 I wanted my two sons to experience big game fishing, what we got was a whole lot more.” 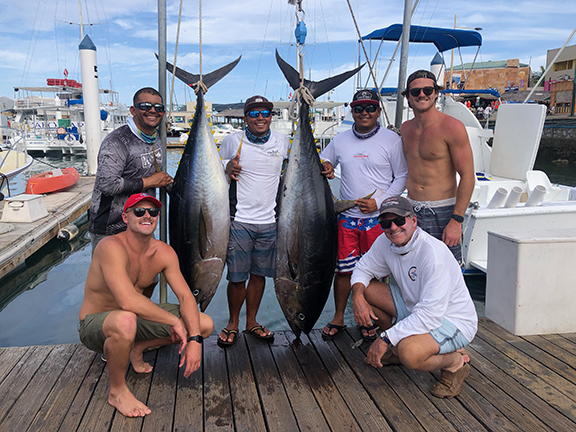 We started our adventure by arriving in Cabo San Lucas on Monday, November 23rd. We figured we would spend the Thanksgiving week with one day of fishing then enjoy all that Cabo has to offer for the remainder of our time there.  We booked a fishing charter in advance with Fin Addict www.finaddictcabo.com, a 31’ Bertram captained by Martin Olascoaga and his crew David and Alex.

The advanced preparation was a good sign, they took care of everything: fishing licenses, box lunches, beer, water, and ice.  The boat was fueled and ready to go when we arrived at 6:15 AM on Tuesday morning.  I must say, I have never seen a boat, of any size, more equipped for the task at hand.  The Fin Addict is purpose designed and built, from its twin diesel power to the bait system and outrigger configuration to the way the kite is managed, and the beautiful Okuma and Phenix tackle.

We discussed the day’s strategy with Martin agreeing we would look for tuna.  Though excited to get started we also had our expectations set; the fishing had been hit and miss, the tuna were staying low and had moved out, and the dorado being caught were pretty small.  Even the dependable marlin was scarce. 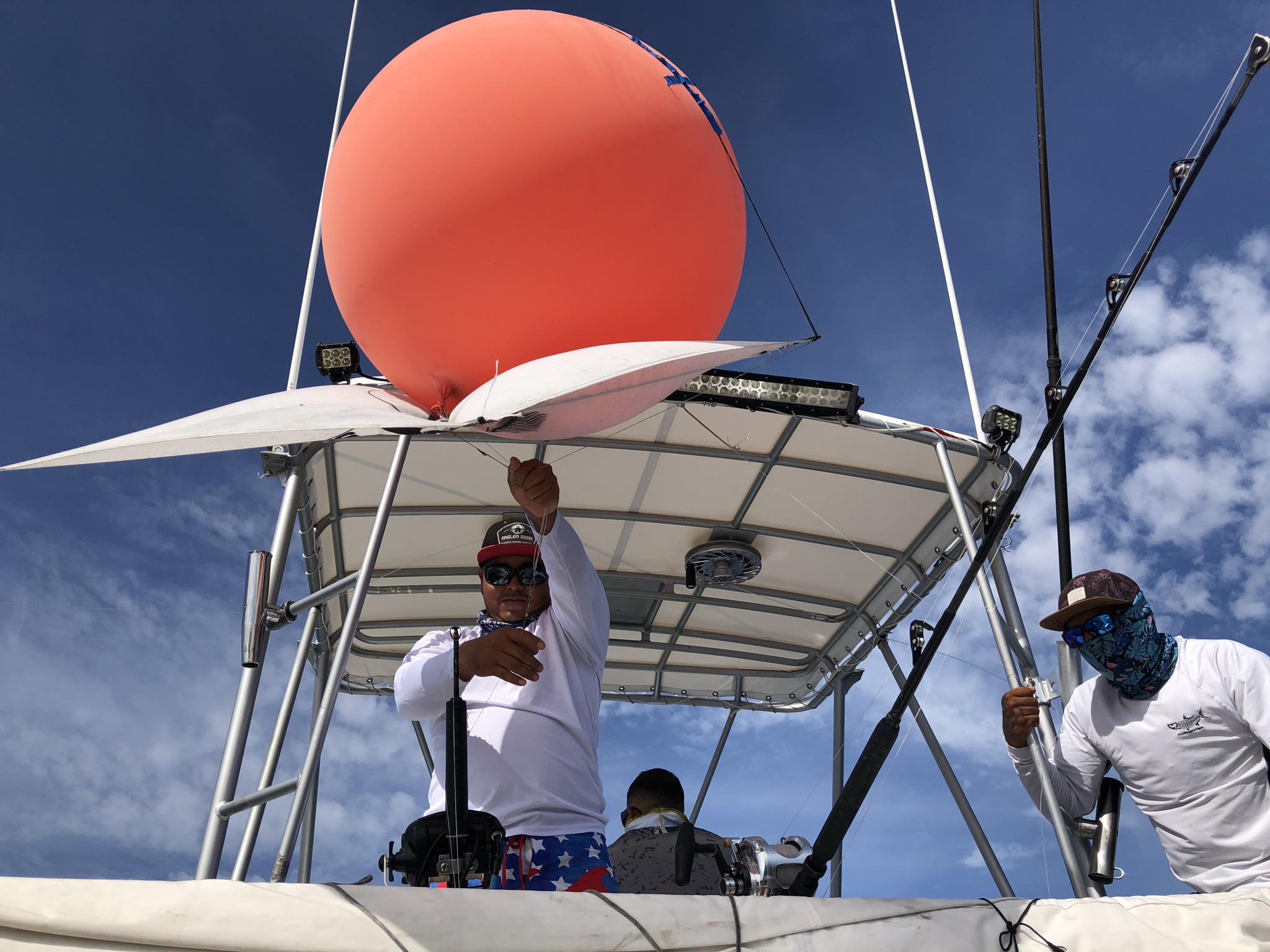 The day was long and quiet, we ran more than 15 miles along the Pacific / Sea of Cortez dividing line looking for signs.  We saw a few birds and some dolphins, but no spotted or spinners, which tuna typically hangs out with.  All-in-all not a lot of life by Cabo standards.  After hours of trolling with intermittent running to check out glimpses of hope spied through the binos, we turned back towards the cape hoping to pick something up closer to shore.  We did see one striper that we cast on several times, but it just wasn’t having it.  At the end of the day we were skunked; the only catching we did was skipjack to fill the tuna tubes on our way out in the morning.

My boy’s got a first-hand reality check on why it’s called fishing and not catching, but all was not lost, as we motored passed the arch we reflected on the day and we all agreed, it was great.  We melded as a group, as a team, with our newfound friends and crew.  We felt good about the total effort; the patience and perseverance demonstrated.  We left it all on the water that day, spending every ounce of experience and knowhow toward a goal that was not to be.

Now we had a decision to make; do we take our loss and enjoy the next few days in Cabo or try again.  The only day Fin Addict was available was Thursday, Thanksgiving Day.  I let the boys decide and they gave me the answer I was hoping for.  “Let’s get out there again, we can’t give up.”  So, we booked it and got ready to try again. 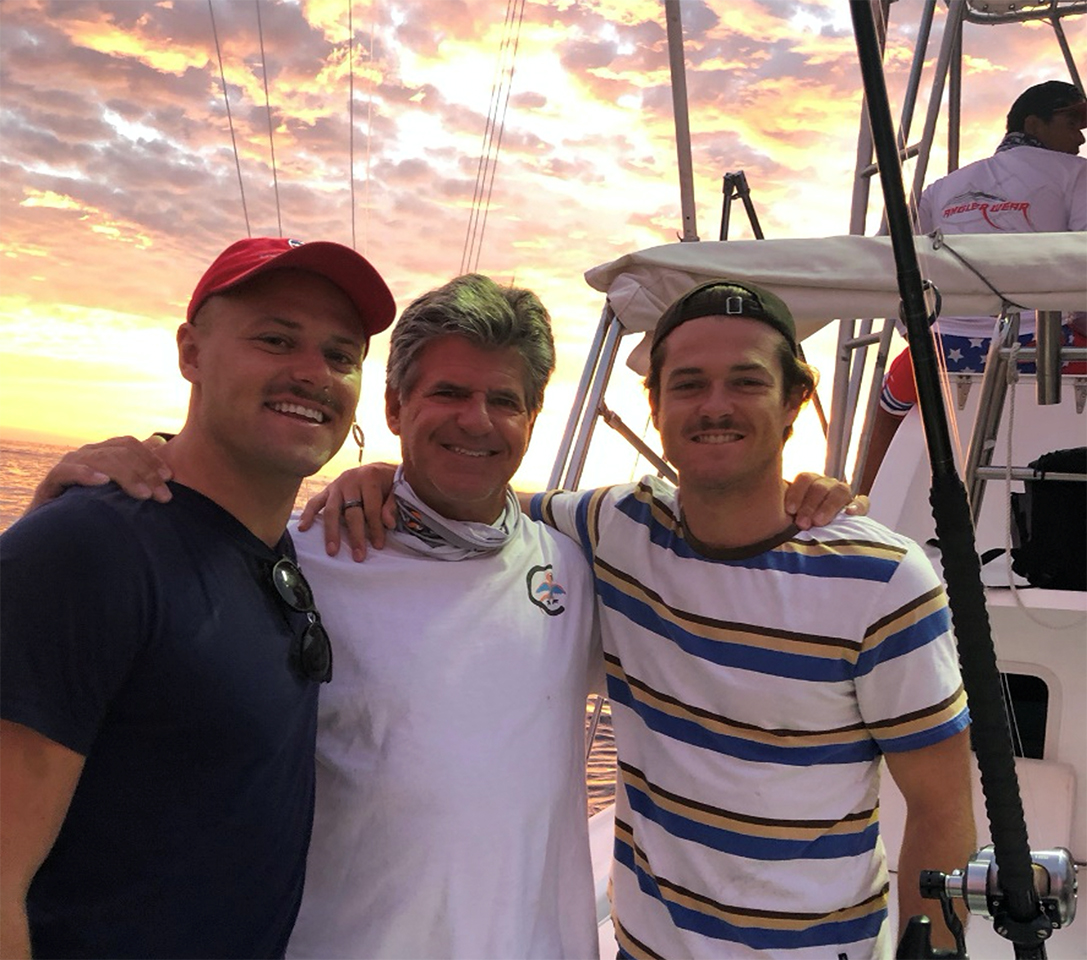 Thursday started out as a beautiful early morning run on the Pacific side toward Jaime Bank, but about 30-minutes into the run things started getting rough and by the time we started to troll we were rolling gunwale-to-gunwale with capping seas and a pretty good swell.  Again, after trolling for several hours with no good signs we began to fight off those feelings of doubt.  Determined not to be skunked again, we turned and trolled down swell towards Lighthouse Bank on reports of a bait ball and potential for marlin.  On the way we encountered a striper and played a game of cat and mouse for 30-minutes, landing bait practically in its mouth, but it just wouldn’t bite.  Once on the bank there was bait in the water and plenty of boats, but no bent poles.

But there was something else, the occasional spotted dolphin, the right kind of dolphin. The easy call from Martin would have been to suggest we drop lines for marlin, like everyone else.  Instead we motored through the fleet with lines up and connected with a small pod of maybe five dolphins slowly moving north.  We stayed with them for 30-minutes then began to chum intermittently as more dolphins showed up.  As the main fleet of boats faded in the distance, we popped the kite on the hunch there was something more far below this growing pod of dolphins.  Within 20-minutes we got a double hit on the kite, landing a 247lb yellow fin in just under 30-minutes.  We reset and 15-minutes later we had our second strike, a 157 lb. yellow fin, which finished our day.  We had plenty of fish for ourselves and the crew, so we turned for home, getting back in time for a great Thanksgiving feast.  It is worth noting, from what we could see, we were the only boat in the fleet with any tuna at all onboard.

We would have had a great time either way, but I am so glad we did not give up, and neither did the crew of the Fin Addict.  Aside from landing incredible fish, my boys learned some valuable life lessons, and we all made memories of a lifetime.

Thank you to the expertise and efforts of Captain Martin and the crew of Fin Addict.