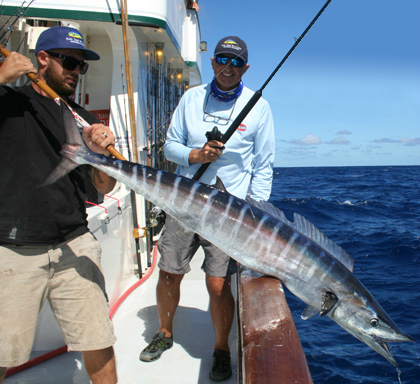 The 24 anglers aboard Captain Sam Patella’s “American Angler” out of Point Loma Sportfishing in San Diego knew that a strong El Nino was placing the fish in some less than usual locations. Anglers from SoCal, NorCal, Oregon, Washington, Florida, and even Hawaii journeyed to San Diego for what was to be a very interesting PENN Fishing University adventure.

As the American Angler headed south toward Alijos Rocks, Captain Patella investigated several areas that had been holding wahoo on previous trips. The first day after departure, the boat could coax up only a single wahoo from the vicinity of the Ranger Bank and San Benitos Islands. Continuing south to where the previous trip had scored well at Hippolito and the Richardson Bank, our group could only manage two of the wily skinnies, all on trolled marauders.
Upon arrival at Alijos Rocks on day 3, the crew immediately deployed the standard-issue wahoo trolling rigs; large marauders in orange/black, purple/black, and dorado colors. Besides rigging the trolling lures in the traditional manner on 275-pound wire cable, some of the marauders were rigged on 300-pound fluorocarbon. Despite plenty of effort, including trying a rainbow of lure colors, along with several different spread patterns and speeds, not a single wahoo was caught trolling during two full days at Alijos. 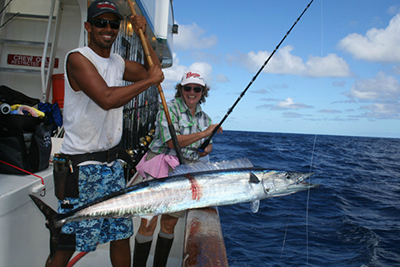 Knowing full well there were wahoo to be had, Captain Patella anchored up in one of his favorite spots as the anglers fanned out and tossed all of their favorite wahoo offerings. Almost immediately, Jeff Ingram of Oceanside hooked up on a black/red Tady 45, and landed a nice wahoo that would ultimately be the jackpot fish.

However, it became very apparent that although there were plenty of wahoo in the water, it was going to take “finesse” techniques to get them, and that means live bait. As with almost any gamefish species, selecting the absolute liveliest possible bait is the key to success. This is even more true with wahoo, which love to chase things.

Finesse was going to be called for, and although wahoo can be aggressive, they can also turn as finicky as brown trout. With perfect bait and presentation, getting a bite on 40-pound tackle was not too difficult, but dropping down to 30-pound was more productive, so long as drags are set properly, and anglers are able to keep up with a fish that can swim up or down the rail with astonishing speed.
Another tricky part of finesse wahoo fishing is the need for an 18-24 inch wire leader. Any longer, and the weight of the wire will restrict the bait’s ability to swim freely. Any shorter, and if the wahoo swallows your bait deeply, a bite-off can still occur. Best connection from wire to mono is via a black #4 Owner Solid Ring.

Regarding wire, many anglers find multi-strand wire easiest to work with, but single strand wire gets more bites, and the amazing new Terminator Titanium wire is even stealthier. Learning the Haywire Twist will get you operating with singlestrand, and the Perfection Loop is the way to go with Terminator Titanium.

A happy medium must be determined to discover the correct sire size for any given day. Too light, and wahoo’s razor sharp teeth will still cut through the wire, and too heavy will simply mean bites will be few and far between. Although at times anglers may resort to wire as light as 27-pound test for wahoo, on this trip they were biting through even the 40 and 44-pound stuff relatively quickly. 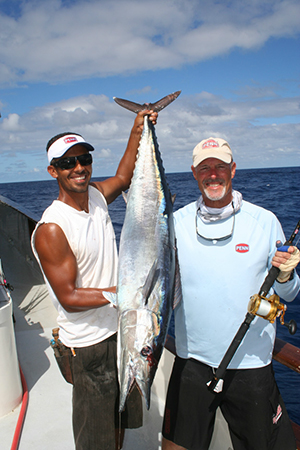 Next up is hook choice. Most of the time a #1/0 or #2/0 Owner Ringed Gorilla Hooks were the standard choice with live sardines, but when the fish get picky, lighter hooks are in order. A #2/0 or #3/0 Owner Gorilla Light Hook is less restrictive to the bait, and offers plenty of strength with typical 30-pound tackle, even if a stray tuna picks up the bait.

Anglers got bit via hooking their baits via the three most popular methods, nose hooking, shoulder hooking, or belly-hooking; personal preference being the determining factor. A huge mistake many anglers make occurs after what may feel like a “short bite” on live bait. The angler reels in to find exactly half the bait has been bitten off, as if by a razor blade.

Quite often the ‘hoo will zoom through at first, slicing the bait cleanly in half, then leisurely return to eat the other half of what it knows is a bait that cannot escape. The trick is to suppress the urge to reel in after a short zip, and to leave the bait out for another 20-30 seconds or so, which will frequently result in the fish coming back for what is left of the bait.

A final little trick when the wahoo appear to have vanished. Sometimes a couple of fish will be literally hiding directly under the boat, and the flylined sardines are heading way out past them. Using a 1 or 2-ounce egg sinker directly above the wire leader, simply drop a lively sardine overboard, letting it straight down. It is amazing how quickly the bite will occur as a fish comes from under the hull to grab the bait.
A handful of wahoo were also caught on traditional wahoo bombs, and a few anglers also managed to fool a couple of the surface iron, including chrome Sumo 7X, and a mint-color Tady 45, along with losing a number of good surface jigs to wahoo bite-offs. Final wahoo tally at Alijos was 42 the first day, and 32 the second day. 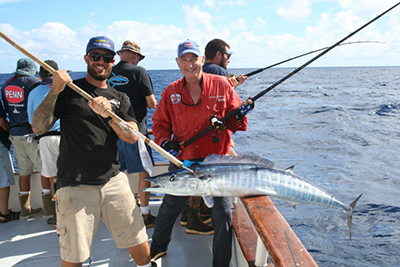 The tuna and yellowtail were scattered due to strong El Nino currents, but a coastal spot at Canoas yielded a pretty good bite for most of a morning, and resulted in 85 quality-grade yellows hitting the deck. As is typical of Baja yellowtail, yo-yo iron was the best way to get them, with blue/white or scrambled egg color Sumo JR or Tady A2 jigs being among the favored choices.
In addition to the flurry of yellowtail found at Canoas, there was also a moderate pick at Cedros Island, but nothing like the torrid bites sometimes found at that locale. A couple of good-size tuna were hooked among the wahoo at Alijos, with an estimated 100-pounder lost at gaff, and a 46-pounder landed. In addition, a half-dozen schoolie-size yellowfin tuna were caught incidentally during each day of wahoo fishing.

The area around Alijos Rocks was teeming with striped marlin, and a few blue marlin. Although the group generally tried their best to avoid them, a number of stripers and at least two blues were hooked, although none were actually brought onboard the boat.
On the way down and the way back, all of the coastal spots held species that are familiar to SoCal anglers, but in sizes rarely seen in CA waters. Included in the catch, but usually released were: calico bass, some monster bonito, barracuda, skipjack tuna, dorado, sheephead, whitefish, black skipjack, lingcod, sand bass, and rockfish. 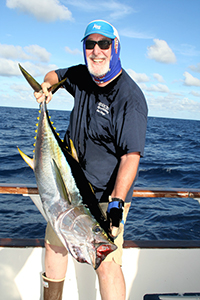 In addition to veteran skipper Sam Patella, the very experienced crew included deck technicians Andrew Viola, Dave Ibrahim, Justin Coffman, and Matt Pehkoff. Like a well-oiled machine, the deck crew was a blur, seemingly everywhere at once. Simultaneously they were gaffing fish, unraveling tangles, tying on hooks, and even baiting hooks; all the while keeping up a great attitude and an eagle eye to make sure every facet of fishing productivity was maximized.
Meanwhile the galley crew consisting of Chef Paul Cloutier and his assistant James Van Wormer kept us gaining weight every day, despite our burning tonnage of carbs running up and down the deck chasing fish. Three phenomenal meals a day, plus two substantial snacks made sure nobody ever went hungry.

American Angler crewman Andrew Viola [L] does the heavy lifting for Dr.Chong Chang of Portland on another nice wahoo.

Ramon Cendejas of Los Angeles was a long range rookie when he left the dock, but he fished like a boss from the word go. “I caught 6 wahoo and 9 yellowtail, plus I hooked a marlin, along with some miscellaneous fish including a couple of very big bonito. The highlight of the trip was definitely catching my first wahoo and hooking my first marlin. I learned how to prep my lures for wahoo, and how to fish a wahoo bomb. “My goal on the next trip will be to just catch even more wahoo. The crew of the American Angler was very responsive to my needs, and I loved the variety of food. When I am at home, I mostly fish the Channel Islands, and also 1.5 day trips out of San Diego.”

Steve Goldblatt of San Diego had been on six long-range trips previous to this one, and also has a lifetime of experience fishing the San Diego local fleet. “I caught 5 wahoo, 3 yellowfin tuna, 5 yellowtail, and lots of miscellaneous fish, including the ‘three B’s’ in very large sizes. The highlight of the trip for me is always the camaraderie, plus I hooked at least 4 marlin including a huge blue marlin. I learned that it is very important to use good sun protection and stay hydrated, along with sneaking in a nap whenever you can. My goal on the next trip will be to catch a 100-pound tuna, and also to bring a loved one along. “The American Angler crew gives world class service; they are true professionals and very patient. I also think that the food is really great too. When I am at home, I fish the San Diego 1.5 day boats, in particular the Prowler, and also surf fish at South Coronado and Torrey Pines Beach. ”

Overall Jackpot winner was Jeff Ingram of Oceanside, for his 47.6 pound wahoo, which earned him a nice trophy. Ingram also earned a PENN Fathom 2-speed reel for his catch, which he graciously rolled forward to second place winner Steve Goldblatt for his 46.2 pound yellowfin tuna. Largest fish on a PENN demo reel was the 40.8 pound wahoo caught by Ramon Cendejas, which also earned him a PENN Fathom 2-speed reel. 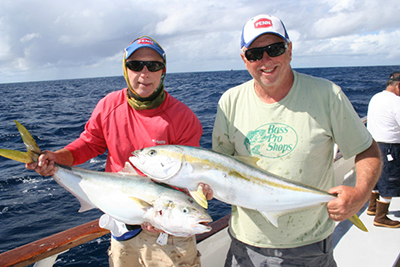 The Olson brothers, Ken [L] of Newbury Park, and Rob of Tacoma, WA, are not twins, but their yellowtail caught aboard the American Angler might be.